Study of feasibility of a mission to Mars using aerocapture technique 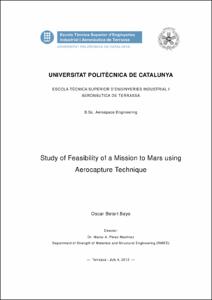 Except where otherwise noted, content on this work is licensed under a Creative Commons license : Attribution-NonCommercial-NoDerivs 3.0 Spain
Abstract
Aerocapture is a brand new technique of orbit insertion, which consists in the energy depletion of a spacecraft using atmospheric drag. This decelerates the space vehicle and changes its trajectory from hyperbolic orbit to elliptic orbit. Then two propulsive maneuvers must be performed in order to obtain the desired final orbit. This project seeks to assess the viability of aerocapture. It includes an implementation of a simulation tool so-called AECASIM1 that is able of simulating the aerocapture maneuver. This software contains simple environment and vehicle models that help to describe the desired aerocapture problem for its analysis. PredGuid guidance algorithm was implemented and adapted to this project’s objectives and scenario. In order to analyse the performances of this maneuver, four essential parameters were varied and some conclusions about their influence on aerocapture were drawn. Furthermore, capturable corridors were constituted with respect to the different parameter variations and were also compared between them, in order to distinguish the best possible configuration. Finally, a comparison with regular propulsive methods was performed. It revealed that with aerocapture technique great fuel savings can be achieved. For the studied case, this allows to increase the vehicle mass about a 77% and hence to rise payload mass or to reduce the initial mass approximately by a half, reducing with this the costs of the mission.
SubjectsSpace vehicles--Orbital assembly, Space flight, Mart (Planeta), Vol espacial, Vehicles espacials
DegreeENGINYERIA AERONÀUTICA (Pla 2004)
URIhttp://hdl.handle.net/2099.1/16425
Collections
Share: