Microfluidic platform for multiple parameters readouts in a point-of-care 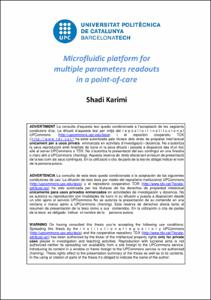 Chair / Department / Institute
Universitat Politècnica de Catalunya. Departament d'Enginyeria Mecànica
Document typeDoctoral thesis
PublisherUniversitat Politècnica de Catalunya
Rights accessOpen Access
All rights reserved. This work is protected by the corresponding intellectual and industrial property rights. Without prejudice to any existing legal exemptions, reproduction, distribution, public communication or transformation of this work are prohibited without permission of the copyright holder
Abstract
The research is motivated by real applications, such as pasteurization plant, water networks and autonomous system, which each of them require a specific control system to provide proper management able to take into account their particular features and operating limits in presence of uncertainties related to their operation and failures from component breakdowns. According to that most of the real systems have nonlinear behaviors, it can be approximated them by polytopic linear uncertain models such as Linear Parameter Varying (LPV) and Takagi-Sugeno (TS) models. Therefore, a new economic Model Predictive Control (MPC) approach based on LPV/TS models is proposed and the stability of the proposed approach is certified by using a region constraint on the terminal state. Besides, the MPC-LPV strategy is extended based on the system with varying delays affecting states and inputs. The control approach allows the controller to accommodate the scheduling parameters and delay change. By computing the prediction of the state variables and delay along a prediction time horizon, the system model can be modified according to the evaluation of the estimated state and delay at each time instant. To increase the system reliability, anticipate the appearance of faults and reduce the operational costs, actuator health monitoring should be considered. Regarding several types of system failures, different strategies are studied for obtaining system failures. First, the damage is assessed with the rainflow-counting algorithm that allows estimating the component’s fatigue and control objective is modified by adding an extra criterion that takes into account the accumulated damage. Besides, two different health-aware economic predictive control strategies that aim to minimize the damage of components are presented. Then, economic health-aware MPC controller is developed to compute the components and system reliability in the MPC model using an LPV modeling approach and maximizes the availability of the system by estimating system reliability. Additionally, another improvement considers chance-constraint programming to compute an optimal list replenishment policy based on a desired risk acceptability level, managing to dynamically designate safety stocks in flow-based networks to satisfy non-stationary flow demands. Finally, an innovative health-aware control approach for autonomous racing vehicles to simultaneously control it to the driving limits and to follow the desired path based on maximization of the battery RUL. The proposed approach is formulated as an optimal on-line robust LMI based MPC driven from Lyapunov stability and controller gain synthesis solved by LPV-LQR problem in LMI formulation with integral action for tracking the trajectory.
Description
Tesi amb una secció retallada per drets de l'editor
CitationKarimi, S. Microfluidic platform for multiple parameters readouts in a point-of-care. Tesi doctoral, UPC, Departament d'Enginyeria Mecànica, 2020. Available at: <http://hdl.handle.net/2117/190676>
URIhttp://hdl.handle.net/2117/190676
Collections
Share: