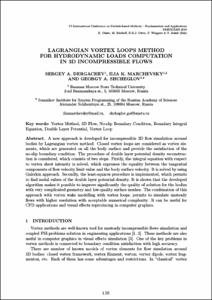 Show full item record
Dergachev, Sergey A.
Marchevsky, Ilia K.
Shcheglov, Georgy A.
Document typeConference report
PublisherCIMNE
Rights accessOpen Access
Abstract
A new approach is developed for incompressible 3D flow simulation around bodies by Lagrangian vortex method. Closed vortex loops are considered as vortex elements, which are generated on all the body surface and provide the satisfaction of the no-slip boundary condition. The procedure of double layer potential density reconstruc- tion is considered, which consists of two steps. Firstly, the integral equation with respect to vortex sheet intensity is solved, which expresses the equality between the tangential components of flow velocity limit value and the body surface velocity. It is solved by using Galerkin approach. Secondly, the least-squares procedure is implemented, which permits to find nodal values of the double layer potential density. It is shown that the developed algorithm makes it possible to improve significantly the quality of solution for the bodies with very complicated geometry and low-quality surface meshes. The combination of this approach with vortex wake modelling with vortex loops, permits to simulate unsteady flows with higher resolution with acceptable numerical complexity. It can be useful for CFD applications and visual effects reproducing in computer graphics.
URIhttp://hdl.handle.net/2117/186476
ISBN978-84-121101-1-1
Collections
Share: