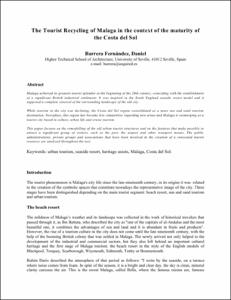 Show full item record
Barrera Fernández, Daniel
Document typeConference report
PublisherInternational Forum on Urbanism
Escola Técnica Superior d'Arquitectura de Barcelona
Rights accessOpen Access
Abstract
Malaga achieved its greatest tourist splendor at the beginning of the 20th century, coinciding with the establishment of a significant British industrial settlement. It was inspired in the South England seaside resort model and it supposed a complete renewal of the surrounding landscape of the old city. While tourism in the city was declining, the Costa del Sol region consolidated as a mass sun and sand tourism destination. Nowadays, this region has become less competitive regarding new areas and Malaga is reemerging as a tourist city based in culture, urban life and cruise tourism. This paper focuses on the remodelling of the old urban tourist structures and on the features that make possible to attract a significant group of visitors, such as the port, the airport and other transport means. The public administrations, private groups and associations that have been involved in the creation of a renovated tourist resource are analyzed throughout the text.
CitationBarrera Fernández, Daniel. The tourist recycling of Malaga in the context of the maturity of the Costa del Sol. A: Conference of the International Forum on Urbanism. "6th Conference of the International Forum on Urbanism (IFoU): TOURBANISM, Barcelona, 25-27 gener". Barcelona: IFoU, 2012, p. 1-6.
URIhttp://hdl.handle.net/2099/12542
ISBN978-84-8157-620-7
Collections
Share: