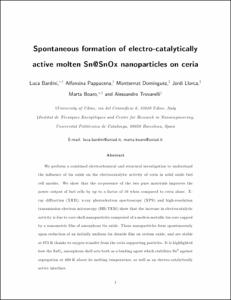 Boaro, Marta
Trovarelli, Alessandro
Document typeArticle
Rights accessOpen Access
Abstract
The morphological and chemical modifications following reduction in hydrogen at 873 K of stannic oxide deposited on ceria particles were studied in order to gain insights into the nature of Ce-Sn interaction under reducing atmosphere, simulating the operating conditions in a solid oxide fuel cell. It is shown that the co-presence of the two materials improves the power output of fuel cells up to a factor of 10 when compared to ceria alone. Through high resolution transmission electron microscopy (HRTEM), X-ray photoelectron spectroscopy (XPS), and in-situ X-ray diffraction (XRD) data we show the formation of a novel system made up of nanoparticles composed of a molten Sn0 core capped by an amorphous tin oxide layer. SnOx shell acts as a binding agent which stabilizes Sn0 nanoparticles on ceria even after reductive treatment at temperatures well above the melting point of tin. This occurs through an interfacial redox communication between ceria and tin, likely involving a transfer of oxygen from ceria to the metal and electrons from metal to ceria. It is highlighted how the Sn@SnOx nanostructures and their spontaneous formation could be used as a model for the development of catalyst nano-assembly comprising an amorphous metal oxide triple phase boundary, opening the way for a new paradigm in the development of multifunctional catalytic systems
CitationBardini, L., Pappacena, A., Dominguez, M., Llorca, J., Boaro, M., Trovarelli, A. Structural and electrocatalytic properties of molten core Sn@SnOx nanoparticles on ceria. "Applied catalysis B. Environmental", 15 Novembre 2016, vol. 197, p. 254-261.
URIhttp://hdl.handle.net/2117/99981
DOI10.1016/j.apcatb.2016.02.050
ISSN0926-3373
Publisher versionhttp://www.sciencedirect.com/science/article/pii/S0926337316301473
Collections
Share: