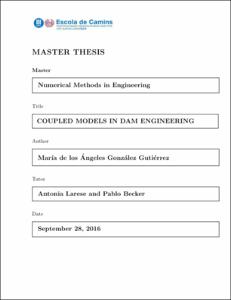 Document typeMaster thesis
Rights accessOpen Access
Abstract
Rock ll dams are certainly one of the most important engineering structures due to their economic advantages and exible design. Unfortunately their vulnerability to overtopping still remains their weakest point. For that reason, several research groups are interested in both the numerical and experimental analysis of this phenomenon. In this work we focused on the numerical analysis. The previous work developed in CIMNE on a coupled PFEM-Eulerian free surface Compu- tational Fluid Dynamic (CFD-PFEM) technique for the simulation of porous problems has been studied and extended in the present work. The Particle Finite Element second generation method (PFEM-2) has been used as an alter- native to the Particle Finite Element Method (PFEM). Hence a new coupling strategy, called CFD-PFEM-2, has been developed. On one hand, the uid free surface problem outside and inside the rock ll slope is treated using a unique Eulerian xed mesh formulation. On the other hand, the structural dam response is analyzed using a mixed Eulerian--Lagrangian framework ( the PFEM-2 method). A comparison between the coupled strategies CFD-PFEM, and CFD-PFEM-2 has been performed. Additionally, all the numerical results are compared with experiments on prototype rock ll dams. The results obtained with the new strategy show a good agreement with both the experi- mental results and the CFD-PFEM code. Furthermore, the computational efficiency between the two numerical strategies was found to be almost identical. Given the similar accuracy and required computational power, it is concluded that the CFD-PFEM-2 is a competitive strategy to simulate the phenomenon.
SubjectsBarrages; Dams, Jetties, Preses (Enginyeria), Esculleres
DegreeMÀSTER UNIVERSITARI EN MÈTODES NUMÈRICS EN ENGINYERIA (Pla 2012)
URIhttp://hdl.handle.net/2117/99980
Collections
Share: