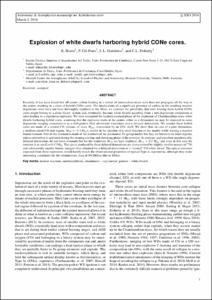 Doherty, Carolyn L.
Document typeArticle
PublisherEDP Sciences
Rights accessOpen Access
Abstract
Recently, it has been found that off-center carbon burning in a subset of intermediate-mass stars does not propagate all the way to the center, resulting in a class of hybrid CONe cores. The implications of a significant presence of carbon in the resulting massive degenerate cores have not been thoroughly explored so far. Here, we consider the possibility that stars hosting these hybrid CONe cores might belong to a close binary system and, eventually, become white dwarfs accreting from a nondegenerate companion at rates leading to a supernova explosion. We computed the hydrodynamical phase of the explosion of Chandrasekhar-mass white dwarfs harboring hybrid cores, assuming that the explosion starts at the center; this explosion occurs either as a detonation, as may be expected in some degenerate merging scenarios, or as a deflagration that afterward transitions into a delayed detonation. We assume these hybrid cores are made of a central CO volume, of mass M_CO, surrounded by an ONe shell. We show that, in the case of a pure detonation, a medium-sized carbon-rich region, M_CO < 0.4 solar masses, results in the ejection of a small fraction of the mantle while leaving a massive bound remnant. Part of this remnant is made of the products of the detonation, that is, Fe-group nuclei, but they are buried in its inner regions unless convection is activated during the ensuing cooling and shrinking phase of the remnant. In contrast, and somehow paradoxically, delayed detonations do not leave remnants other than for the minimum M_CO we explored, M_CO = 0.2 solar masses, and even in this case the remnant is as small as 0.13 solar masses. The ejecta produced by these delayed detonations are characterized by slightly smaller masses of 56Ni and substantially smaller kinetic energies than the ejecta obtained for a delayed detonation of a “normal” CO white dwarf. The optical emission expected from these explosions most likely do not match the observational properties of typical Type Ia supernovae, although they make interesting candidates for the subluminous class of SN2002cx-like or SNIax.
CitationBravo, E., Gil Pons, P., Gutierrez, J., Doherty, C. Explosion of white dwarfs harboring hybrid CONe cores. "Astronomy & astrophysics", 12 Abril 2016, vol. 589, p. A38-A38+11.
URIhttp://hdl.handle.net/2117/99847
DOI10.1051/0004-6361/201527861
ISSN1432-0746
Publisher versionhttp://www.aanda.org/articles/aa/abs/2016/05/aa27861-15/aa27861-15.html
Collections
Share: