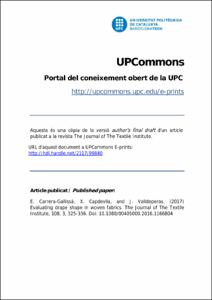 Valldeperas Morell, Josep
Document typeArticle
Rights accessOpen Access
All rights reserved. This work is protected by the corresponding intellectual and industrial property rights. Without prejudice to any existing legal exemptions, reproduction, distribution, public communication or transformation of this work are prohibited without permission of the copyright holder
Abstract
A search of the scientific literature for the period 1950–2013 retrieved 36 different drape indicators. Despite the large number of indicators currently available, the drape ratio (%DR) continues to be the most widely used, even though it has proved inadequate to explain drape shape. In order to assess their actual performance, the 36 currently existing drape indicators were determined in a total of 37 commercial drapery, woolmaking, shirtmaking and lining woven fabrics spanning a wide range of composition, aerial weight and weave type by using a digital Cusick drape meter. A correlation analysis between indicators, and subsequent suppression of duplicity and collinearity, revealed that seven were mutually correlated. A principal component analysis of the results revealed an underlying structure consisting of three common factors which allowed the indicators to be classified into three different groups according to drape intensity (a), severity (b), and shape symmetry and variability (c). Cluster analysis was additionally used to examine the results in graphical form and exposed three clusters coinciding with the three factors of the underlying structure. A criterion for distinguishing fabrics with an identical drape ratio in terms of drape shape based on sequential application of four of the seven initially selected indicators was developed and experimentally validated
CitationCarrera-Gallissà, E., Capdevila, F., Valldeperas, J. Evaluating drape shape in woven fabrics. "Journal of the Textile Institute", 9 Gener 2017, vol. 108, núm. 3, p. 325-336.
URIhttp://hdl.handle.net/2117/99840
DOI10.1080/00405000.2016.1166804
ISSN0040-5000
Publisher versionhttp://www.tandfonline.com/doi/full/10.1080/00405000.2016.1166804
Collections
Share: