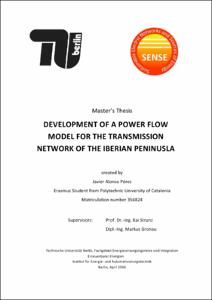 Show full item record
Alonso Pérez, Javier
Tutor / director / evaluatorStrunz, Kai; Gronau, Markus
CovenanteeTechnische Universität Berlin
Document typeMaster thesis (pre-Bologna period)
Rights accessOpen Access
Abstract
Over the last years, due to the increasing use of renewable energy, the typical way of producing and transporting electricity in Iberian Peninsula has changed. The way to produce energy has evolved from thermal and hydraulic plants located in specific regions of the Iberian Peninsula into renewable power plants such as wind and solar plants distributed along all the peninsula, in addition to the thermal and hydraulic power plants aforementioned. These renewable power plants have connection priority compared to the thermal power plants, due to the weather and environmental conditions, the model of power generation is evolving into an ideal model with a 100% of renewable generation and the variable cost of producing energy in this way is cheaper than in other. This causes that the production of electricity in conventional thermal power stations has decreased dramatically in recent years; neverhteless it is true that its use remains essential. This production model change provokes the requirement of a revision of the electric transmission network to prevent cases in which their elements will be overloaded. In this research, a model of transmission of electricity in the Iberian Peninsula is developed in order to simulate different electrical power production and demand scenarios and make it possible to observe if the electrical system is capable of transmitting energy successfully on these conditions. To do so, I will start with making a theoretical review on how an electrical system is studied. Later on, an overview of the current electrical system is given in order to have a general idea of how the production of electricity in the Iberian Peninsula is produced and demanded. Afterwards, the database will be drawn. In this database all the considered elements in the electrical system and its parameters will be added in. Finally, the software will be programmed and tested on several critical scenarios occurred previously. From these scenarios some conclusions will be drawn. As a result of the thesis a model of the Iberian Peninsula will be obtained and it will be able to simulate different scenarios of energy production and demand.
SubjectsEnergy transfer, Transferència d'energia
ProvenanceAquest document conté originàriament altre material i/o programari no inclòs en aquest lloc web
Location
1: Sol, 28013 Madrid, Espanya
2: Lissaboni Lennujaam, 1150-228 Lisboa, Portugal
URIhttp://hdl.handle.net/2117/99822
Collections
Share: