The irruption of Airbnb and its effects on hotel profitability: An analysis of Barcelona’s hotel sector 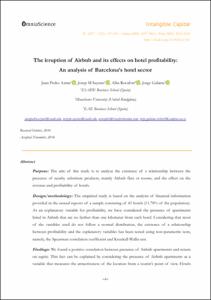 Show full item record
Aznar, Juan Pedro
Sayeras, Josep M.
Rocafort, Alba
Galiana Richart, Jorge
Document typeArticle
PublisherOmniaScience
Rights accessOpen Access
Abstract
Purpose: The aim of this study is to analyze the existence of a relationship between the presence of nearby substitute products, mainly Airbnb flats or rooms, and the effect on the revenue and profitability of hotels. Design/methodology: The empirical study is based on the analysis of financial information provided in the annual reports of a sample consisting of 43 hotels (11.78% of the population). As an explanatory variable for profitability, we have considered the presence of apartments listed in Airbnb that are no farther than one kilometer from each hotel. Considering that most of the variables used do not follow a normal distribution, the existence of a relationship between profitability and the explanatory variables has been tested using non-parametric tests, namely, the Spearman correlation coefficient and Kruskall-Wallis test. Findings: We found a positive correlation between presence of Airbnb apartments and return on equity. This fact can be explained by considering the presence of Airbnb apartments as a variable that measures the attractiveness of the location from a tourist’s point of view. Hotels located near the city center or main tourist areas of the city have a higher level of profitability. We also found no evidence of any relationship between profitability and star category; 4- and 3- star hotels have experienced, on average, a lower drop in revenues between 2008 and 2013 and they also obtained a higher average level of profitability in 2013 as compared to the upper segment of 5-star hotels. Research limitations/implications: This research has been conducted in the city of Barcelona. Future research using the same methodology should be applied to other cities with an important hospitality sector to reinforce our findings. The main implications of this research refer to the importance of location as a key strategic variable in hospitality, and to the change in the system customers use to evaluate the quality of a hotel, according to which the traditional star category system has been partially replaced by new sources of information available through the new communication technologies. Originality/value: This paper is one of the first contributions that scholars have made to obtain a deeper understanding of the effects of the new forms of the sharing economy, focusing on the hospitality industry.
CitationAznar, Juan Pedro [et al.]. The irruption of Airbnb and its effects on hotel profitability: An analysis of Barcelona’s hotel sector. "Intangible Capital", Gener 2017, vol. 13, núm. 1, p. 147-159.
URIhttp://hdl.handle.net/2117/99784
DOI10.3926/ic.921
DLB-33375-2004
ISSN1697-9818
Collections
Share: