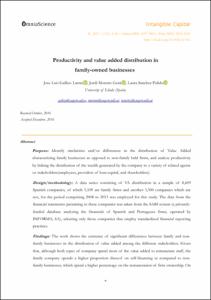 Show full item record
Gallizo Larraz, Jose Luis
Moreno Gené, Jordi
Sánchez Pulido, Laura
Document typeArticle
PublisherOmniaScience
Rights accessOpen Access
Abstract
Purpose: Identify similarities and/or differences in the distribution of Value Added characterizing family businesses as opposed to non-family held firms, and analyse productivity by linking the distribution of the wealth generated by the company to a variety of related agents or stakeholders(employees, providers of loan capital, and shareholders). Design/methodology: A data series consisting of VA distribution in a sample of 8,609 Spanish companies, of which 5,109 are family firms and another 3,500 companies which are not, for the period comprising 2008 to 2013 was employed for this study. The data from the financial statements pertaining to these companies was taken from the SABI system (a privatelyfunded database analysing the financials of Spanish and Portuguese firms, operated by INFORMA, SA), selecting only those companies that employ standardized financial reporting practices. Findings: The work shows the existence of significant differences between family and nonfamily businesses in the distribution of value added among the different stakeholders. Given that, although both types of company spend most of the value added to remunerate staff, the family company spends a higher proportion thereof on self-financing as compared to nonfamily businesses, which spend a higher percentage on the remuneration of firm ownership. On the other hand, the lower labour productivity of family businesses is apparent, a result that can be explained both by the lower staff monetary remuneration, as well as the use of production technologies that are also less capital-intensive. Research limitations/implications: The study included only medium and large companies. These are companies that report financial statements offering more disaggregated data (through use of the standard forms).This owes to the legal requirement of these companies to file a cash flow statement, a necessary source for deriving information on dividends paid by the company. Originality/value: This is the first study in which the workings of added value are used to analyse the presence of measurable management differences in a large sample of companies using family ownership as the main criteria for differentiation.
CitationGallizo Larraz, Jose Luis; Moreno Gené, Jordi; Sánchez Pulido, Laura. Productivity and value added distribution in family-owned businesses. "Intangible Capital", Gener 2017, vol. 13, núm. 1, p. 4-24.
URIhttp://hdl.handle.net/2117/99772
DOI10.3926/ic.916
DLB-33375-2004
ISSN1697-9818
Collections
Share: