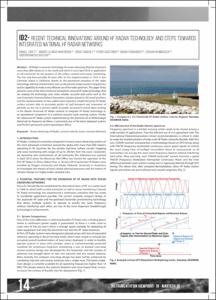 HF Radar is a proven technology for ocean observing that has at present more than 600 references in the world and which is since April 2016 in application on all continents for the purpose of 2D surface currents and waves monitoring. This has only been possible 44 years after its first implementation in 1972 in San Clemente Island in California, thanks to the permanent evolution of the radar technology with key achievements such as the present unique system compactness and its capability to make a very efficient use of the radio spectrum. This paper firstly presents some of the latest technical innovations around HF radar technology that are making the technology even more reliable, accurate and useful such as the new Automatic Antenna Pattern Generation solution based on AIS vessel positions and the implementation of new added value trajectory models forced by HF Radar surface currents able to accurately predict oil spill transport and movement of particles on the sea or persons adrift. Secondly, we present current plans existing in the Iberian Peninsula HF Radar network to integrate HF Radar technology as an operational component of a national tsunami early warning system. Finally, the advanced HF Radar system implemented by the Direction de la Météorologie Nationale du Royaume du Maroc is presented; one of the latest deployed systems and the first permanent system operating in Africa.
CitationLópez, Ismael [et al.]. Recent technical innovations around HF radar technology and steps towards integrated national HF radar networks. A: 7th International Workshop on Marine Technology : MARTECH 2016. "Instrumentation Viewpoint". Vilanova i la Geltrú: SARTI, 2016, p. 14-16.
URIhttp://hdl.handle.net/2117/99754
ISSN1886-4864