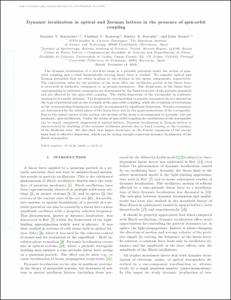 Dynamic localization in optical and Zeeman lattices in the presence of spin-orbit coupling.pdf (1,608Mb)
Share:

Document typeArticle
Rights accessOpen Access
Abstract
The dynamic localization of a two-level atom in a periodic potential under the action of spin-orbit coupling and a weak harmonically varying linear force is studied. We consider optical and Zeeman potentials that are either in phase or out of phase in two spinor components, respectively. The expectation value for the position of the atom after one oscillation period of the linear force is recovered in authentic resonances or in pseudoresonances. The frequencies of the linear force corresponding to authentic resonances are determined by the band structure of the periodic potential and are affected by the spin-orbit coupling. The width or dispersion of the wave packet in authentic resonances is usually minimal. The frequencies corresponding to pseudoresonances do not depend on the type of potential and on the strength of the spin-orbit coupling, while the evolution of excitations at the corresponding frequencies is usually accompanied by significant dispersion. Pseudoresonances are determined by the initial phase of the linear force and by the quasimomentum of the wave packet. Due to the spinor nature of the system, the motion of the atom is accompanied by periodic, but not harmonic, spin oscillations. Under the action of spin-orbit coupling the oscillations of the wave packet can be nearly completely suppressed in optical lattices. Dynamic localization in Zeeman lattices is characterized by doubling of the resonant oscillation periods due to band crossing at the boundary of the Brillouin zone. We also show that higher harmonics in the Fourier expansion of the energy band lead to effective dispersion, which can be strong enough to prevent dynamic localization of the Bloch wave packet.
CitationKartashov, Y.V., Konotop, V., Zezyulin, D., Torner, L. Dynamic localization in optical and Zeeman lattices in the presence of spin-orbit coupling. "Physical review A", 8 Desembre 2016, vol. 94, núm. 6.
URIhttp://hdl.handle.net/2117/99712
DOI10.1103/PhysRevA.94.063606
ISSN1050-2947
Publisher versionhttp://journals.aps.org/pra/abstract/10.1103/PhysRevA.94.063606
Collections
Share: