Firefighting as a strategic game 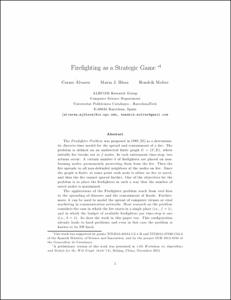 Molter, Hendrik
Document typeArticle
PublisherTaylor & Francis
Rights accessOpen Access
ProjectMODELOS Y METODOS COMPUTACIONALES PARA DATOS MASIVOS ESTRUCTURADOS (MINECO-TIN2013-46181-C2-1-R)
Abstract
The Firefighter Problem was proposed in 1995 as a deterministic discrete-time model for the spread and containment of a fire. The problem is defined on an undirected finite graph G = (V, E), where fire breaks out initially at f nodes. In each subsequent time-step, two actions occur: a certain number b of firefighters are placed on nonburning nodes, permanently protecting them from the fire, then the fire spreads to all nondefended neighbors of the nodes on fire. Because the graph is finite, at some point each node is either on fire or saved, and thus the fire cannot spread further. One of the objectives for the problem is to place the firefighters in such a way that the number of saved nodes is maximized. The applications of the Firefighter Problem reach from real fires to the spreading of diseases and the containment of floods. Furthermore, it can be used to model the spread of computer viruses or viral marketing in communication networks. Most research on the problem considers the case in which the fire starts in a single place (i.e., f = 1), and in which the budget of available firefighters per time-step is one (i.e., b = 1). So does the work in this study. This configuration already leads to hard problems and, even in this case, the problem is known to be NP-hard. In this work, we study the problem from a game-theoretical perspective. We introduce a strategic game model for the Firefighter Problem to tackle its complexity from a different angle. We refer to it as the Firefighter Game. Such a game-based context seems very appropriate when applied to large networks where entities may act and make decisions based on their own interests, without global coordination. At every time-step of the game, a player decides whether to place a new firefighter in a nonburning node of the graph. If so, he must decide where to place it. By placing it, the player is indirectly deciding which nodes to protect at that time-step. We define different utility functions in order to model selfish and nonselfish scenarios, which lead to equivalent games. We show that the Price of Anarchy (PoA) is linear for a particular family of graphs, but it is at most two for trees. We also analyze the quality of the equilibria when coalitions among players are allowed. It turns out that it is possible to compute an equilibrium in polynomial time, even for constant-size coalitions. This yields to a polynomial time approximation algorithm for the problem and its approximation ratio equals the PoA of the corresponding game. We show that for some specific topologies, the PoA is constant when constant-size coalitions are considered.
CitationÁlvarez, C., Blesa, M., Molter, H. Firefighting as a strategic game. "Internet mathematics", 31 Març 2016, vol. 12, núm. 1-2, p. 101-120.
URIhttp://hdl.handle.net/2117/99674
DOI10.1080/15427951.2015.1110542
ISSN1542-7951
Publisher versionhttp://dx.doi.org/10.1080/15427951.2015.1110542
Collections
Share: