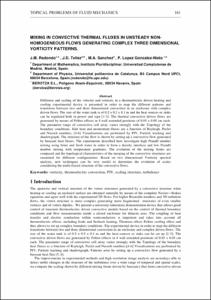 Sanchez, Jesus M.
Lopez Gonzalez-Nieto, Pilar
Document typeConference report
Rights accessOpen Access
Abstract
Diffusion and scaling of the velocity and vorticity in a thermoelectric driven heating and cooling experimental device is presented in order to map the different patterns and transitions between two and three dimensional convection in an enclosure with complex driven flows. The size of the water tank is of 0.2 x 0.2 x 0.1 m and the heat sources or sinks can be regulated both in power and sign [1-3]. The thermal convective driven flows are generated by means of Peltier effects in 4 wall extended positions of 0.05 x 0.05 cm each. The parameter range of convective cell array varies strongly with the Topology of the boundary conditions. Side heat and momentum fluxes are a function of Rayleigh, Peclet and Nusselt numbers, [4-6] Visualizations are performed by PIV, Particle tracking and shadowgraph. The structure of the flow is shown by setting up a convective flow generated by buoyant heat fluxes. The experiments described here investigate high Prandtl number mixing using brine and fresh water in order to form a density interface and low Prandtl number mixing with temperature gradients. The evolution of the mixing fronts are compared and the topological characteristics of the merging of the convective structures are examined for different configurations. Based on two dimensional Vorticity spectral analysis, new techniques can be very useful to determine the evolution of scales considering the multi-fractal structure of the convective flows.
CitationRedondo, J. M., Tellez, J-D, Sanchez, J., Lopez, P. Mixing in convective thermal fluxes in unsteady nonhomogeneous flows generating complex three dimensional vorticity patterns. A: Topical Problems of Fluid Mechanics. "Proceedings Topical Problems of Fluid Mechanics 2016". Prague: 2016, p. 161-168.
URIhttp://hdl.handle.net/2117/99588
DOI10.14311/TPFM.2016.022
ISBN978-80-87012-58-1
Collections
Share: