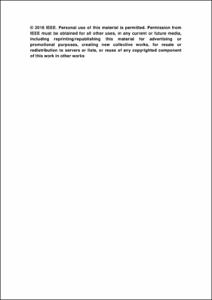 Valencia, Daniel F.
Borrat, Xavier
Gambus, Pedro L.
Valencia, Jose F.
Document typeConference lecture
PublisherInstitute of Electrical and Electronics Engineers (IEEE)
Rights accessOpen Access
Abstract
Monitoring the levels of sedation-analgesia may be helpful for managing patient stress on minimally invasive medical procedures. Monitors based on EEG analysis and designed to assess general anesthesia cannot distinguish reliably between a light and deep sedation. In this work, the Poincaré plot is used as a nonlinear technique applied to EEG signals in order to characterize the levels of sedation-analgesia, according to observed categorical responses that were evaluated by means of Ramsay Sedation Scale (RSS). To study the effect of high frequencies due to EMG activity, three different frequency ranges (FR1=0.5-110 Hz, FR2=0.5-30 Hz and FR3=30-110 Hz) were considered. Indexes from power spectral analysis and plasma concentration of propofol and remifentanil were also compared with the bispectral index BIS. An adaptive Neurofuzzy Inference System was applied to model the interaction of the best indexes with respect to RSS score for each analysis, and leave-one-out cross validation method was used. The ability of the indexes to describe the level of sedation-analgesia, according with the RSS score, was evaluated using the prediction probability (Pk). The results showed that the ratio SD1/SD2FR3 contains useful information about the sedation level, and SD1FR2 and SD2FR2 had the best performance classifying response to noxious stimuli. Models including parameters from Poincaré plot emerge as a good estimator of sedation-analgesia levels.
Description
© 2016 IEEE. Personal use of this material is permitted. Permission from IEEE must be obtained for all other uses, in any current or future media, including reprinting/republishing this material for advertising or promotional purposes, creating new collective works, for resale or redistribution to servers or lists, or reuse of any copyrighted component of this work in other works
CitationBolaños , J., Vallverdu, M., Caminal, P., Valencia , D., Borrat, X., Gambus, P., Valencia, J. Assessment of sedation-analgesia by means of Poincaré analysis of the electroencephalogram. A: Annual International Conference of the IEEE Engineering in Medicine and Biology Society. "2016 38th annual international conference of the IEEE Engineering in Medicine and Biology Society (EMBC)". Orlando, FL: Institute of Electrical and Electronics Engineers (IEEE), 2016, p. 6425-6428.
URIhttp://hdl.handle.net/2117/99575
DOI10.1109/EMBC.2016.7592199
ISBN978-1-4577-0220-4
Publisher versionhttp://ieeexplore.ieee.org/document/7592199/
Collections
Share: