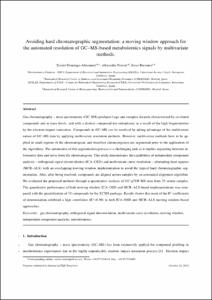 Brezmes, Jesus
Document typeArticle
Rights accessOpen Access
Abstract
Gas chromatography–mass spectrometry (GC–MS) produces large and complex datasets characterized by co-eluted compounds and at trace levels, and with a distinct compound ion-redundancy as a result of the high fragmentation by the electron impact ionization. Compounds in GC–MS can be resolved by taking advantage of the multivariate nature of GC–MS data by applying multivariate resolution methods. However, multivariate methods have to be applied in small regions of the chromatogram, and therefore chromatograms are segmented prior to the application of the algorithms. The automation of this segmentation process is a challenging task as it implies separating between informative data and noise from the chromatogram. This study demonstrates the capabilities of independent component analysis–orthogonal signal deconvolution (ICA–OSD) and multivariate curve resolution–alternating least squares (MCR–ALS) with an overlapping moving window implementation to avoid the typical hard chromatographic segmentation. Also, after being resolved, compounds are aligned across samples by an automated alignment algorithm. We evaluated the proposed methods through a quantitative analysis of GC–qTOF MS data from 25 serum samples. The quantitative performance of both moving window ICA–OSD and MCR–ALS-based implementations was compared with the quantification of 33 compounds by the XCMS package. Results shown that most of the R2 coefficients of determination exhibited a high correlation (R2 > 0.90) in both ICA–OSD and MCR–ALS moving window-based approaches.
CitationDomingo, X., Perera, A., Brezmes, J. Avoiding hard chromatographic segmentation: A moving window approach for the automated resolution of gas chromatography–mass spectrometry-based metabolomics signals by multivariate methods. "Journal of chromatography A", 25 Novembre 2016, vol. 1474, p. 145-151.
URIhttp://hdl.handle.net/2117/99562
DOI10.1016/j.chroma.2016.10.066
ISSN0021-9673
Publisher versionhttp://www.sciencedirect.com/science/article/pii/S0021967316314315
Collections
Share: