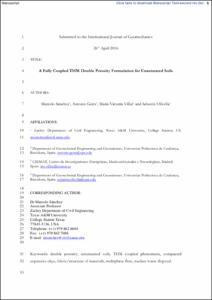 Document typeArticle
Rights accessOpen Access
Abstract
This work presents a fully coupled formulation developed to handle engineering problems in unsaturated (and saturated) soils that present two dominant void levels. The proposed framework assumes the presence of two porous media linked through a mass-transfer term between them. In its more general form, the proposed approach allows the consideration of nonisothermal multiphase flow coupled with the mechanical problem. The double-porosity formulation was implemented in a finite-element code and has been used to analyze a variety of engineering problems. The approach is especially suitable for cases in which the material exhibits a strong coupling between the mechanical and the hydraulic problems in both media, such as with swelling clays. For those types of problems, the proposed formulation is used in conjunction with the mechanical double-structure model already proposed by the authors. This paper presents the coupled formulation and the application of the proposed approach to problems involving expansive unsaturated clays. Very satisfactory results were obtained in these analyses. -
CitationSánchez, M., Gens, A., Victoria, M., Olivella, S. Fully coupled thermo-hydro-mechanical double-porosity formulation for unsaturated soils. "International journal of geomechanics", Desembre 2016, vol. 16, núm. 6, p. D4016015-1-D4016015-17.
URIhttp://hdl.handle.net/2117/99550
DOI10.1061/(ASCE)GM.1943-5622.0000728
ISSN1532-3641
Publisher versionhttp://ascelibrary.org/doi/10.1061/%28ASCE%29GM.1943-5622.0000728
Collections
Share: