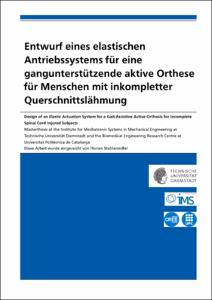 A spinal cord injury severely reduces the quality of life of affected people. Following the injury, limitations of the ability to move may occur due to the disruption of the motor and sensory functions of the nervous system depending on the severity of the lesion. An active stance-control knee-ankle-foot orthosis was developed and tested in earlier works to aid incomplete SCI subjects by increasing their mobility and independence. This thesis aims at the incorporation of elastic actuation into the active orthosis to utilise advantages of the compliant system regarding efficiency and human-robot interaction as well as the reproduction of the phyisological compliance of the human joints. Therefore, a model-based procedure is adapted to the design of an elastic actuation system for a gait-assisitve active orthosis. A determination of the optimal structure and parameters is undertaken via optimisation of models representing compliant actuators with increasing level of detail. The minimisation of the energy calculated from the positive amount of power or from the absolute power of the actuator generating one human-like gait cycle yields an optimal series stiffness, which is similar to the physiological stiffness of the human knee during the stance phase. Including efficiency factors for components, especially the consideration of the electric model of an electric motor yields additional information. A human-like gait cycle contains high torque and low velocities in the stance phase and lower torque combined with high velocities during the swing. Hence, the efficiency of an electric motor with a gear unit is only high in one of the phases. This yields a conceptual design of a series elastic actuator with locking of the actuator position during the stance phase. The locked position combined with the series compliance allows a reproduction of the characteristics of the human gait cycle during the stance phase. Unlocking the actuator position for the swing phase enables the selection of an optimal gear ratio to maximise the recuperable energy. To evaluate the developed concept, a laboratory specimen based on an electric motor, a harmonic drive gearbox, a torsional series spring and an electromagnetic brake is designed and appropriate components are selected. A control strategy, based on impedance control, is investigated and extended with a finite state machine to activate the locking mechanism. The control scheme and the laboratory specimen are implemented at a test bench, modelling the foot and shank as a pendulum articulated at the knee. An identification of parameters yields high and nonlinear friction as a problem of the system, which reduces the energy efficiency of the system and requires appropriate compensation. A comparison between direct and elastic actuation shows similar results for both systems at the test bench, showing that the increased complexity due to the second degree of freedom and the elastic behaviour of the actuator is treated properly. The final proof of concept requires the implementation at the active orthosis to emulate uncertainties and variations occurring during the human gait.
SubjectsHuman mechanics, Pròtesis
URIhttp://hdl.handle.net/2117/99495