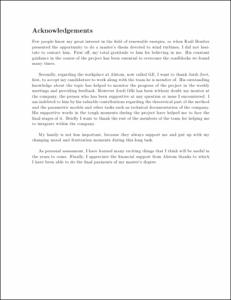 Document typeMaster thesis
Rights accessOpen Access
Abstract
The present master’s thesis defines a methodology to reduce the computational complexity in stress fatigue calculation of structural components of wind turbines. The process is independent of the component analyzed and only relies upon the loads induced to them. The set of loads considered are obtained with numerical techniques and they are composed of several variables. The strategy to develop this methodology consists of reducing the loads in their three dimensions: number of variables, samples and loads, in that order. The variable reduction method is based on common principal component analysis (CPCA) in which we propose that the covariance among loads has some common structure. We emphasize the importance of mean value for foundry components, by including the information of the mean to the rotation matrix of the variance. We further propose several options to configure the eigenvectors in the global rotation matrix. The second step consists of reducing observations by filtering loads while preserving variable inter-dependence. The strategy focuses on the removal of values from loads that are removed in the time series (TS) of every variable. The last step consists of reducing the number of loads while maintaining the damage to the original loads. This part is incomplete but we performed an initial exploratory analysis to devise a strategy to decrease the number of loads. We made feature extraction of TS to infer groups with similar loads using hierarchical clustering (HC) analysis. We introduce previous methods of load reconstruction that involve Markov matrices and TS parametric models, however at this moment they are unable to deal with multivariate loads. This document collects all the steps followed to design a methodology, and it is validated in a real case application of a hub in a wind turbine.
SubjectsWind power, Turbines -- Automatic control, Energia eòlica, Turbines -- Control automàtic
ProvenanceAquest document conté originàriament altre material i/o programari no inclòs en aquest lloc web
URIhttp://hdl.handle.net/2117/99437
Collections
Share: