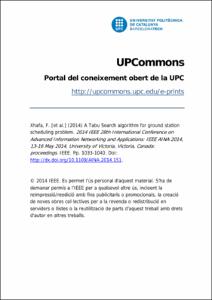 Herrero Garcia, Xavier
Barolli, Admir
Takizawa, Makoto
Document typeConference report
Rights accessOpen Access
Abstract
Mission planning plays an important role in satellite control systems. Satellites are not autonomously operated in many cases but are controlled by tele-commands transmitted from ground stations. Therefore, mission scheduling is crucial to efficient satellite control systems, especially with increase of number of satellites and more complex missions to be planned. In a general setting, the satellite mission scheduling consists in allocating tasks such as observation, communication, etc. to resources (spacecrafts (SCs), satellites, ground stations). One common version of this problem is that of ground station scheduling, in which the aim is to compute an optimal planning of communications between satellites and operations teams of Ground Station (GS). Because the communication between SCs and GSs can be done during specific window times, this problem can also be seen as a window time scheduling problem. The required communication time is usually quite smaller than the window of visibility of SCs to GSs, however, clashes are produced, making the problem highly constrained. In this paper we present a Tabu Search (TS) algorithm for the problem, while considering several objective functions, namely, windows fitness, clashes fitness, time requirement fitness, and resource usage fitness. The proposed algorithm is evaluated by a set of problem instances of varying size and complexity generated with the STK simulation toolkit. The computational results showed the efficacy of TS for solving the problem on all considered objectives.
Description
(c) 2014 IEEE. Personal use of this material is permitted. Permission from IEEE must be obtained for all other users, including reprinting/republishing this material for advertising or promotional purposes, creating new collective works for resale or redistribution to servers or lists, or reuse of any copyrighted components of this work in other works.
CitationXhafa, F., Herrero , X., Barolli, A., Takizawa, M. A Tabu Search algorithm for ground station scheduling problem. A: IEEE International Conference on Advanced Information Networking and Applications. "2014 IEEE 28th International Conference on Advanced Information Networking and Applications: IEEE AINA 2014, 13-16 May 2014, University of Victoria, Victoria, Canada: proceedings". Victoria: 2014, p. 1033-1040.
URIhttp://hdl.handle.net/2117/99330
DOI10.1109/AINA.2014.151
ISBN978-1-4799-3629-8
Publisher versionhttp://ieeexplore.ieee.org/document/6838778/
Collections
Share: