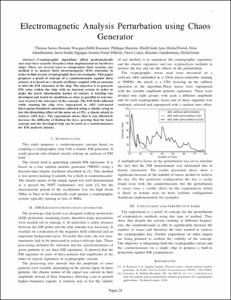 Show full item record
Sarno, Thomas
Wacquez, Romain
Kussener, Edith
Maurine, Philippe
Jradi, Khalil
Portal, Jean-Michel
Aboulkassimi, Driss
Souiki-Figuigui, Sarra
Postel-Pellerin, Jeremy
Canet, Pierre
Chambonnea, Maxime
Grojo, David
Document typeConference report
Rights accessOpen Access
Abstract
Cryptographic algorithms albeit mathematically sure may have security breaches when implemented on hardware chips. There are several ways to compromise their security, one method is to analyze their electromagnetic (EM) emissions in order to find secrets (cryptographic keys for example). This paper proposes a proof of concept of a countermeasure against these attacks, it is based on a chaotic oscillator coupled with an antenna to blur the EM emissions of the chip. The objective is to generate EM noise within the chip with an internal system in order to make the secret information harder to extract. A testchip was developed and tested in conditions as close as possible to real usecase to prove the relevance of the concept. The EM field collected while running the chip were superposed to AES (Advanced Encryption Standard) emissions collected using a similar setup to test the disturbing effect of the noise on a CPA, a classic attack to retrieve AES keys. The experiment shows that it can effectively increase the difficulty of finding the keys, proving that the basic concept and the developed chip can be used as a countermeasure for EM analysis attacks.
Location
1: Zona Universitària-Escola T S d'Enginyers, 08028 Barcelona, Espanya
URIhttp://hdl.handle.net/2117/99317
Collections
Share: