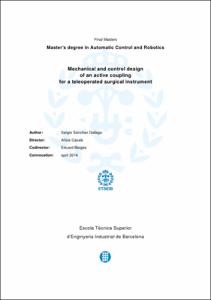 This project is oriented to design and implement a mechanical coupling of surgical instruments for laparoscopy. Laparoscopy to a robot, a Minimally Invasive Surgery (MIS) technique, is a surgical technique where the surgeon is capable to carry out an internal operation through small incisions (0.5-1.5 cm) in the patient’s body. The inclusion of new technologies in this field has improved the MIS technique [1]. Most of the laparoscopy instruments have limited degrees of freedom (DOF) which is a limitation when the movements done by the surgeon are inside the abdominal wall of the patients. Increasing the number of DOF for laparoscopy instruments avoid this limitation. The aim of this project is to increase the dexterity of two teleoperated robots, which are installed in the ESAII LAB with a manual surgical instrument attached to their end effector. The instruments themselves are provided with 1 DOF at the tip, which is actuated by a servo to open or close the clamps. The robots add six additional DOF to the tool, three for the spatial positioning and three for the orientation of the tool. The main handicap is that these DOF are located at the handle of the instrument, (the last joint of the robot), and transferring them to the tool’s tip may require large movements of the robots due to geometrical constraints. In some cases, the reverse kinematics needed leads the robot to a joints links configuration unavailable inside the working range. To achieve the objective, three degrees of freedom instruments for laparoscopy will be coupled to our robots’ end effectors which facilitates the orientation of the tool without the need for the robot to perform large displacements. Therefore, the mechanical parts and the electronic board will be designed in order to attach this instrument to our robots and be able to control them through teleoperation. The tip of each instrument has 3 DOF mechanically driven, so an active transmission is required in order to move them for the tool’s tip orientation. The robots’ end effectors has been modified to increase the handling of the actual surgical instrument. Our work consists in designing and developing the physical coupling between robot and its surgical instrument, the servos coupling and also the control of the servos which provide the orientation for the tool tip.
SubjectsLaparoscopic surgery, Robotics in medicina, Cirurgia laparoscòpica, Robòtica en medicina
URIhttp://hdl.handle.net/2117/99310