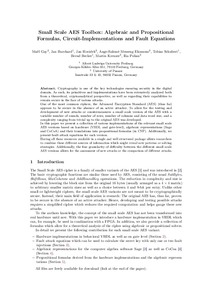 Show full item record
Gay, Maël
Burchard, Jan
Horácek, Jan
Messeng Ekossono, Ange-Salomé
Schubert, Tobias
Becker, Bernd
Kreuzer, Martin
Polian, Ilia
Document typeConference report
Rights accessOpen Access
Abstract
Cryptography is one of the key technologies ensuring security in the digital domain. As such, its primitives and implementations have been extensively analyzed both from a theoretical, cryptoanalytical perspective, as well as regarding their capabilities to remain secure in the face of various attacks. One of the most common ciphers, the Advanced Encryption Standard (AES) (thus far) appears to be secure in the absence of an active attacker. To allow for the testing and development of new attacks or countermeasures a small scale version of the AES with a variable number of rounds, number of rows, number of columns and data word size, and a complexity ranging from trivial up to the original AES was developed. In this paper we present a collection of various implementations of the relevant small scale AES versions based on hardware (VHDL and gate-level), algebraic representations (Sage and CoCoA) and their translations into propositional formulas (in CNF). Additionally, we present fault attack equations for each version. Having all these resources available in a single and well structured package allows researchers to combine these different sources of information which might reveal new patterns or solving strategies. Additionally, the fine granularity of difficulty between the different small scale AES versions allows for the assessment of new attacks or the comparison of different attacks.
Location
1: Zona Universitària-Escola T S d'Enginyers, 08028 Barcelona, Espanya
URIhttp://hdl.handle.net/2117/99210
Collections
Share: