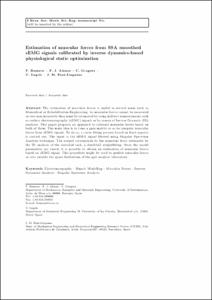 Except where otherwise noted, content on this work is licensed under a Creative Commons license : Attribution-NonCommercial-NoDerivs 3.0 Spain
Abstract
The estimation of muscular forces is useful in several areas such as biomedical or rehabilitation engineering. As muscular forces cannot be measured in vivo non-invasively they must be estimated by using indirect measurements such as surface electromyography (sEMG) signals or by means of inverse dynamic (ID) analyses. This paper proposes an approach to estimate muscular forces based on both of them. The main idea is to tune a gain matrix so as to compute muscular forces from sEMG signals. To do so, a curve fitting process based on least-squares is carried out. The input is the sEMG signal filtered using singular spectrum analysis technique. The output corresponds to the muscular force estimated by the ID analysis of the recorded task, a dumbbell weightlifting. Once the model parameters are tuned, it is possible to obtain an estimation of muscular forces based on sEMG signal. This procedure might be used to predict muscular forces in vivo outside the space limitations of the gait analysis laboratory.
CitationRomero, F., Alonso, F.J., Gragera, C., Lugrís, U., Font-Llagunes, J.M. Estimation of muscular forces from SSA smoothed sEMG signals calibrated by inverse dynamics-based physiological static optimization. "Journal of the Brazilian Society of Mechanical Sciences and Engineering", 1 Desembre 2016, vol. 38, núm. 8, p. 2213-2223.
URIhttp://hdl.handle.net/2117/99092
DOI10.1007/s40430-016-0575-x
ISSN1678-5878
Publisher versionhttp://link.springer.com/article/10.1007%2Fs40430-016-0575-x
Collections
Share: