Reaction Rates of 64Ge(p,g)65As and 65As(p,g)66Se and the Extent of Nucleosynthesis in Type I X-Ray Bursts 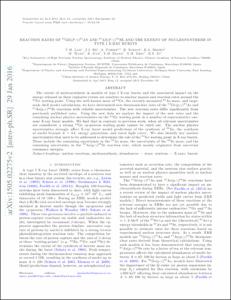 Show full item record
Lam, Y.H.
He, J.J.
Parikh, Anuj Ramesh
Document typeArticle
Rights accessOpen Access
Abstract
The extent of nucleosynthesis in models of type I X-ray bursts (XRBs) and the associated impact on the energy released in these explosive events are sensitive to nuclear masses and reaction rates around the 64Ge waiting point. Using the well known mass of 64Ge, the recently measured 65As mass, and large-scale shell model calculations, we have determined new thermonuclear rates of the 64Ge(p,¿)65As and 65As(p,¿)66Se reactions with reliable uncertainties. The new reaction rates differ significantly from previously published rates. Using the new data, we analyze the impact of the new rates and the remaining nuclear physics uncertainties on the 64Ge waiting point in a number of representative one-zone XRB models. We find that in contrast to previous work, when all relevant uncertainties are considered, a strong 64Ge rp-process waiting point cannot be ruled out. The nuclear physics uncertainties strongly affect XRB model predictions of the synthesis of 64Zn, the synthesis of nuclei beyond A = 64, the energy generation, and the burst light curve. We also identify key nuclear uncertainties that need to be addressed to determine the role of the 64Ge waiting point in XRBs. These include the remaining uncertainty in the 65As mass, the uncertainty of the 66Se mass, and the remaining uncertainty in the 65As(p,¿)66Se reaction rate, which mainly originates from uncertain resonance energieS
CitationLam, Y., He, J., Parikh, A.R. Reaction Rates of 64Ge(p,g)65As and 65As(p,g)66Se and the Extent of Nucleosynthesis in Type I X-Ray Bursts. "Astrophysical journal", Febrer 2016, vol. 818, núm. 78, p. 1-11.
URIhttp://hdl.handle.net/2117/99086
DOI10.3847/0004-637X/818/1/78
ISSN0004-637X
Publisher versionhttp://iopscience.iop.org/article/10.3847/0004-637X/818/1/78/pdf
Collections
Share: