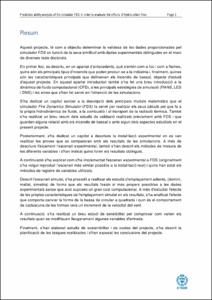 Document typeBachelor thesis
Rights accessOpen Access
Abstract
This project has as a main target to determine the validity of data provided by FDS simulator in function of its similitude with experimental data obtained through different PhD thesis. To start with, in a background section, is explained what is understand for fire and flames, which are the main types of fires that can occur in industry and, finally, which are the main features that define pool fires, which are object of study of this project. In this section, a brief introduction of computational fluids dynamic (CFD) has also been described, as the main simulation strategies in CFD (RANS, LES and DNS). Finally, the used simulation tools have been described. A whole chapter has been dedicated to the description of the different mathematical models FDS uses in order to perform its calculations, regarding to fluids hydrodynamics, combustion and thermal radiation transport. A brief summary of found validation results performed previously with FDS and which are related to the matter of this project have been summarized. After FDS introduction, a chapter has been dedicated to the description of the installation where the experiments were performed, the results of which will be compared with simulation data provided by FDS. Besides the description of the experimental scenario, the different measurement methods used experimentally to catch the registered variables are also described, and experimental results obtained have been compiled. Described the experimental installation and the measurement methods, it has been explained how experimental scenario has been implemented into FDS (originally, the reproduced scenario has been set as similar as possible to the real installation), and which have been the measurement methods for the output variables. Later, emplacement studies have been carried out, in order to find which domain and grid size (symmetry has also been studied) can provide the data which is most nearby to experimental results and, at the meantime, does not require an excessive computational time to be calculated. In addition to the study of the effect of the emplacement on the simulation results, the effect of setting a square pool shape instead of circular on the simulation results has also been studied, and which is the behaviour of both pool shapes when wind speed is increased. Following the pool shape study, a brief sensitivity study in order to check how simulation results vary when some input variables are slightly modified. Finally, sustainability and costs studies have been performed, the tasks planning during the entire stance at CERTEC has been presented and the project conclusions have been exposed.
SubjectsFires -- Mathematical models, Fire, Flame, Combustion, Theory of, Computational fluid dynamics, Incendis -- Models matemàtics, Foc, Flama, Combustió, Dinàmica de fluids -- Simulació per ordinador
URIhttp://hdl.handle.net/2117/99059
Collections
Share: