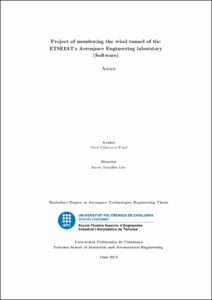 Except where otherwise noted, content on this work is licensed under a Creative Commons license : Attribution-NonCommercial-NoDerivs 3.0 Spain
Abstract
The ETSEIAT’s aerospace engineering laboratory’s wind tunnel used to vary its airflow speed thanks to a potentiometer and the air properties were manually measured. Hence, monitoring the tunnel’s behaviour was the goal. This aim was to be achieved by making use of an Arduino, the proper sensors and genuine software in order to have better control of the velocity and to gather data automatically. Taking this into consideration, a Matlab code which interacts with Arduino was created. It collects the temperature, the atmospheric pressure and the differential pressure at the nozzle, and saves and plots in real time all the data. Moreover, it calculates and stores the air speed as well as comparing it to the desired velocity so as to obtain the error, which is aimed to be minimized, and is later on processed by a PID controller. After mounting the whole system with the appropriate hardware, the sensors were tested and some of them re-calibrated to reduce, as much as possible, all the uncertainties and get a simultaneously efficient, accurate and robust system. Once all the difficulties have been solved it is possible to say that the project has finally been carried out with a greatly satisfactory result and it will be a useful tool for the university.
Description
Monitoritzar i automatitzar el funcionament del túnel de vent del laboratori d'Enginyeria Aeroespacial. Es vol substituir el funcionament manual actual per un d'automatitzat, de forma que es puguin programar assajos i adquirir les dades de forma automàtica
SubjectsWind tunnels, Túnels aerodinàmics
DegreeGRAU EN ENGINYERIA EN TECNOLOGIES AEROESPACIALS (Pla 2010)
Location
1: Departament d'Expressió Gràfica a l'Enginyeria (EGE), 08222 Terrassa, Barcelona, Espanya
URIhttp://hdl.handle.net/2117/99053
Collections
Share: