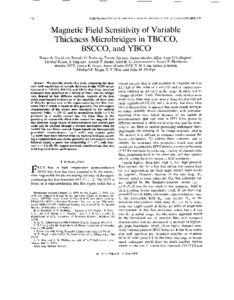 We describe results of a study comparing the magnetic field sensitivities of variable thickness bridge (VTB) arrays fabricated in TBCCO, BSCCO, and YBCO thin films. Identical structures were patterned in a variety of films, and the bridges were thinned by four different methods. Analysis of the data yields experimental evidence as to the suitability of these types of films for devices such as the superconducting flux flow transistor (SFFT) which is based on this geometry. The volt-ampere characteristics of the arrays were measured in low uniform magnetic fields (&les;130 G) and in nonuniform fields (&les;5 G) produced by a nearby control line. For these films in this geometry, no measurable effect of the control line magnetic field was observed. Large values of transresistance and current gain could only be attained through a thermal mechanism when the control line was driven normal. Upper bounds for (magnetically generated) transresistance (&les;5 mΩ) and current gains (&les;0.005) have been inferred from the uniform field data assuming a standard best-case device geometry. All volt-ampere curves followed closely a power law relationship (V~I n), with exponent n ~1.2-10. We suggest materials considerations that may yield improved device performance
CitationDavidson, B. A.; Redwing, R. D.; Nguyen, T.; O'Callaghan, J. M.; Raissi, F.; Lee, J. V.; Bruke, J. P.; Hohenwarter, G. K. G.; Nordman, J. E.; Beyer, J. B.; Magnetic fields sensitivity of variable thickness microbridges in TBCCO, BSCCO and YBCO. IEEE Transactions on applied superconductivity, 1994, vol. 4, núm. 4, p. 228-235.
URIhttp://hdl.handle.net/2117/990
ISSN1051-8223