A numerical model to assess deconditioning of the cardiovascular system in long-term exposure to microgravity. Verification and simulation of Mars mission scenarios 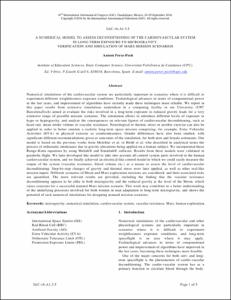 Numerical simulations of the cardiovascular system are particularly important in scenarios where it is difficult to experiment different weightlessness exposure conditions. Technological advances in terms of computational power in the last years, and improvement of algorithms have recently made these techniques more reliable. We report in this paper results from extensive simulations undertaken in a computing facility in our University (UPC BarcelonaTech) aimed at evaluate the risks involved in a long-term exposure to reduced gravity loads for a very extensive range of possible mission scenarios. The simulation allows to introduce different levels of exposure to hypo or hypergravity, and analyze the consequences on relevant figures of cardiovascular deconditioning, such as heart rate, mean stroke volume or vascular resistance. Neurological or thermic stress or aerobic exercise can also be applied in order to better emulate a realistic long-term space mission comprising, for example, Extra Vehicular Activities (EVA) or physical exercise as countermeasures. Gender differences have also been studied, with significant different recommendations given as outcomes of the simulation, for both men and female astronauts. Our model is based on the previous works form Melchier et al. or Heldt et al. who described in analytical terms the process of orthostatic intolerance due to gravity alterations being applied on a human subject. We incorporated these Runge-Kutta equations by using Matlab® and Simulink® software. Results from these models were validated in parabolic flight. We later developed this model to take into account all control system parts involved in the human cardiovascular system, and we finally achieved an electrical-like control model in which we could easily measure the output of the system (vascular resistance, blood volume etc.) as a means to assess the level of cardiovascular deconditioning. Step-by-step changes of gravity and thermal stress were later applied, as well as other real-like mission inputs. Different scenarios of Moon and Mars exploration missions are considered, and their associated risks are quantified. The more relevant results are provided, including the finding that the vascular resistance deconditioning appears to be alike in both microgravity and the reduced gravity at the level of the Moon; which raises concerns for a successful manned Mars mission scenario. This work may contribute to a better understanding of the underlying processes involved for both women in man adaptation to long-term microgravity, and shows the potential of such numerical simulations for designing manned mission scenarios.
CitationPerez-Poch, A. A numerical model to assess deconditioning of the cardiovascular system in long-term exposure to microgravity. Verification and simulation of Mars mission scenarios. A: International Astronautical Congress. "Proceedings of the 67th Astronautical Congress". Guadalajara: 2016, p. IAC-16-A1.3.5.
URIhttp://hdl.handle.net/2117/98924
ISBN1995-6258