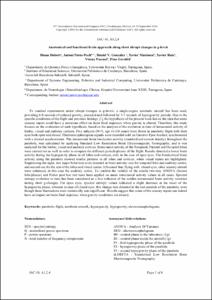 Ventura González Alonso, Daniel
Marimon, Xavier
Ruiz, Xavier
Pascual, Vicenç
Gavaldà, Josefina
Document typeConference report
Rights accessOpen Access
Abstract
To conduct experiments under abrupt changes in g-levels, a single-engine aerobatic aircraft has been used, providing 6-8 seconds of reduced gravity, preceded and followed by 5-7 seconds of hypergravity periods. Due to the specific conditions of the flight and previous findings [1], the hypothesis of the present work lies on the idea that some sensory inputs could have a notorious effect on brain final responses when gravity is altered. Therefore, this study focuses on the evaluation of such hypothesis, based on the analysis of the evolution in time of intracranial activity of limbic, visual and auditory cortices. Five subjects (N=5, age 41¿14 years) have flown in parabolic flight with their eyes both open and closed. Electroencephalogram signals were recorded with an Emotive Epoc headset, synchronized with a triaxial accelerometer. The intracranial brain bioelectric activity (standardized current density) throughout the parabola, was calculated by applying Standard Low Resolution Brain Electromagnetic Tomography, and it was analyzed for the limbic, visual and auditory cortices. Intracranial activity of the Temporal, Parietal and Occipital lobes were carried out as well in order to compare the different periods/phases of the flight. Results detected a lower brain activity during the hypogravity phase in all lobes and cortices, only in the case of open eyes. The bioelectrical brain activity along the parabola showed similar patterns in all lobes and cortices, when visual inputs are highlighted. Suppressing the sight, two major behaviors were detected in brain activity: one for temporal lobe and auditory cortex, and second one for the rest of the lobes and visual cortex. It Seemed that, flying with closed eyes, other sensory stimuli were enhanced, in this case the auditory cortex. To confirm the validity of the results two-way ANOVA (factors lobe/phases) and Fisher post hoc test have been applied on mean intracranial activity values in all cases. Spectral entropy evolution in time has been considered as a fast indicator of the sudden extracranial brain activity variation during short g-changes. For open eyes, spectral entropy values indicated a slight decrease at the onset of the hypogravity phase, whereas in case of closed eyes, this change was detected in the last seconds of the parabola, even though these fluctuations were statistically non-significant. Results suggest that some of the sensory inputs can indeed have an impact on brain final response, when gravity conditions are altered.
CitationDubert, D., Perez-Poch, A., González, D.V., Marimon, X., Ruiz, X., Pascual, V., Gavaldà, J. Anatomical and functional brain approach along short abrupt changes in G-levels. A: International Astronautical Congress. "Proceedings of the 67th Astronautical Congress". Guadalajara: 2016, p. IAC-16-A1.2.4.
URIhttp://hdl.handle.net/2117/98923
ISBN1995-6258
Collections
Share: