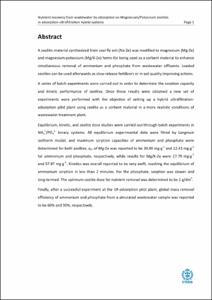 A zeolitic material synthesized from coal fly ash (Na-Ze) was modified to magnesium (Mg-Ze) and magnesium-potassium (Mg/K-Ze) forms for being used as a sorbent material to enhance simultaneous removal of ammonium and phosphate from wastewater effluents. Loaded zeolites can be used afterwards as slow-release fertilizers or in soil quality improving actions. A series of batch experiments were carried out in order to determine the sorption capacity and kinetic performance of zeolites. Once these results were obtained a new set of experiments were performed with the objective of setting up a hybrid ultrafiltration-adsorption pilot plant using zeolite as a sorbent material in a more realistic conditions of wastewater treatment plant. Equilibrium, kinetic, and zeolite dose studies were carried out through batch experiments in NH4+/PO43- binary systems. All equilibrium experimental data were fitted by Langmuir isotherm model, and maximum sorption capacities of ammonium and phosphate were determined for both zeolites. qm of Mg-Ze was reported to be 30.90 mg·g-1 and 12.41 mg·g-1 for ammonium and phosphate, respectively, while results for Mg/K-Ze were 27.79 mg·g-1 and 57.87 mg·g-1. Kinetics was overall reported to be very swift, reaching the equilibrium of ammonium sorption in less than 2 minutes. For the phosphate, sorption was slower and long-termed. The optimum zeolite dose for nutrient removal was determined to be 2 g/dm3. Finally, after a successful experiment at the UF-adsorption pilot plant, global mass removal efficiency of ammonium and phosphate from a simulated wastewater sample was reported to be 60% and 90%, respectively.
SubjectsZeolites, Sewage -- Purification, Ultrafiltration, Zeolites, Aigües residuals -- Depuració, Ultrafiltració
URIhttp://hdl.handle.net/2117/98905