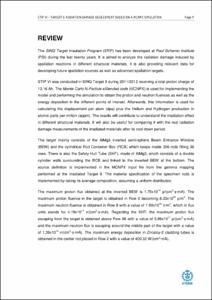 Except where otherwise noted, content on this work is licensed under a Creative Commons license : Attribution-NonCommercial-NoDerivs 3.0 Spain
Abstract
The SINQ Target Irradiation Program (STIP) has been developed at Paul Scherrer Institute (PSI) during the last twenty years. It is aimed to analyze the radiation damage induced by spallation reactions in different structural materials. It is also providing relevant data for developing future spallation sources as well as advanced spallation targets. STIP VI was conducted in SINQ Target 9 during 2011/2012 receiving a total proton charge of 13.16 Ah. The Monte Carlo N-Particle eXtended code (MCNPX) is used for implementing the model and performing the simulation to obtain the proton and neutron fluences as well as the energy deposition in the different points of interest. Afterwards, this information is used for calculating the displacement per atom (dpa) plus the Helium and Hydrogen production in atomic parts per million (appm). The results will contribute to understand the irradiation effect in different structural materials. It will also be useful for comparing it with the real radiation damage measurements of the irradiated materials after its cool down period. The target mainly consists of the AlMg3 inverted semi-sphere Beam Entrance Window (BEW) and the cylindrical Rod Container Box (RCB) which keeps inside 306 rods fitting 36 rows. There is also the Safety Hull Tube (SHT), made of AlMg3, which consists of a double cylinder walls surrounding the RCB and linked to the inverted BEW at the bottom. The source definition is implemented in the MCNPX input file from the gamma mapping performed at the irradiated Target 9. The material specification of the specimen rods is implemented by taking its average composition, assuming a uniform distribution. The maximum proton flux obtained at the inverted BEW is 1.75x1014 p/(cm2 ·s·mA). The maximum proton fluence in the target is obtained in Row 0 becoming 8.33x1025 p/m2 . The maximum neutron fluence is obtained in Row 8 with a value of 1.99x1026 n/m2 , which in flux units stands for 4.19x1014 n/(cm2 ·s·mA). Regarding the SHT, the maximum proton flux escaping from the target is obtained above Row 36 with a value of 5.99x1011 p/(cm2 ·s·mA) and the maximum neutron flux is escaping around the middle part of the target with a value of 1.39x1014 n/(cm2 ·s·mA). The maximum energy deposition in Zircaloy-2 cladding tubes is obtained in the center rod placed in Row 2 with a value of 400.32 W/(cm3 ·mA). Page 2 The irradiation parameters have been calculated by multiplying the proton and neutron fluence with its corresponding material cross section data. The results obtained at the center of the inverted BEW are 8.85 dpa, 2447 appm He and 4854 appm H. For the SHT, the maximum values of the irradiation parameters are obtained around the middle part of the target with the following values: 3.14 dpa, 17.63 appm He and 71.64 appm H. Finally, the maximum displacement per atom in the specimen rods is obtained for Zircaloy-2 in Rod 1, placed in Row 2, with a value of 72.07 dpa and the maximum Helium & Hydrogen concentration are obtained for Tantalum in Rod A, placed in Row 1, with the following values: 3629 appm He and 17418 appm H.
SubjectsNuclear reactors--Safety measures, Reactors nuclears -- Mesures de seguretat
DegreeMÀSTER UNIVERSITARI EN ENGINYERIA NUCLEAR (Pla 2012)
URIhttp://hdl.handle.net/2117/98872
Collections
Share: