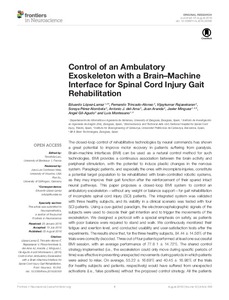 Except where otherwise noted, content on this work is licensed under a Creative Commons license : Attribution 3.0 Spain
Abstract
The closed-loop control of rehabilitative technologies by neural commands has shown a great potential to improve motor recovery in patients suffering from paralysis. Brain–machine interfaces (BMI) can be used as a natural control method for such technologies. BMI provides a continuous association between the brain activity and peripheral stimulation, with the potential to induce plastic changes in the nervous system. Paraplegic patients, and especially the ones with incomplete injuries, constitute a potential target population to be rehabilitated with brain-controlled robotic systems, as they may improve their gait function after the reinforcement of their spared intact neural pathways. This paper proposes a closed-loop BMI system to control an ambulatory exoskeleton—without any weight or balance support—for gait rehabilitation of incomplete spinal cord injury (SCI) patients. The integrated system was validated with three healthy subjects, and its viability in a clinical scenario was tested with four SCI patients. Using a cue-guided paradigm, the electroencephalographic signals of the subjects were used to decode their gait intention and to trigger the movements of the exoskeleton. We designed a protocol with a special emphasis on safety, as patients with poor balance were required to stand and walk. We continuously monitored their fatigue and exertion level, and conducted usability and user-satisfaction tests after the experiments. The results show that, for the three healthy subjects, 84.44 ± 14.56% of the trials were correctly decoded. Three out of four patients performed at least one successful BMI session, with an average performance of 77.6 1 ± 14.72%. The shared control strategy implemented (i.e., the exoskeleton could only move during specific periods of time) was effective in preventing unexpected movements during periods in which patients were asked to relax. On average, 55.22 ± 16.69% and 40.45 ± 16.98% of the trials (for healthy subjects and patients, respectively) would have suffered from unexpected activations (i.e., false positives) without the proposed control strategy. All the patients showed low exertion and fatigue levels during the performance of the experiments. This paper constitutes a proof-of-concept study to validate the feasibility of a BMI to control an ambulatory exoskeleton by patients with incomplete paraplegia (i.e., patients with good prognosis for gait rehabilitation).
CitationLópez, E., Trincado, F., Rajasekaran, V., Pérez, S., Ama, A., Aranda, J., Minguez, J., Gil, A., Montesano, L. Control of an ambulatory exoskeleton with a brain–machine interface for spinal cord injury gait rehabilitation. "Frontiers in neuroscience", 3 Agost 2016, vol. 10, Article 359
URIhttp://hdl.handle.net/2117/98766
DOI10.3389/fnins.2016.00359
ISSN1662-453X
Publisher versionhttp://journal.frontiersin.org/article/10.3389/fnins.2016.00359/full?&utm_source=Email_to_authors_&utm_medium=Email&utm_content=T1_11.5e1_author&utm_campaign=Email_publication&field=&journalName=Frontiers_in_Neuroscience&id=186308
Collections
Share: