Structural optimisation in vehicle development for the current Euro NCAP side crash protocol: how to minimise the structural changes due to the current barrier stiffness and geometry 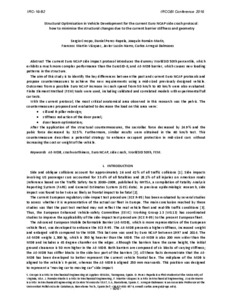 Document typeConference lecture
Rights accessOpen Access
Abstract
Euro NCAP continually examines and modifies its protocols to encourage the automotive industry to improve vehicles and the safety of occupants. The aim of this study is to identify the key differences between the past and current Euro NCAP protocols regarding side impact, in order to apply optimized countermeasures for fulfilling the new requirements in a previously designed vehicle. Outcomes from a possible Euro NCAP increase in crash speed from 50 km/h to 60 km/h were evaluated. The current protocol introduces the dummy WorldSID 50th percentile and changes in the barrier. The changes in the dummy lead to a reduction in the distance between the occupant and the door panel, and the current geometry of the barrier causes the car’s structure, in particular the sill, to be additionally loaded. An increase in mass of the current barrier causes an increase in energy absorption, thus presenting different deformation patterns. With the updated protocol, the most critical anatomical areas observed in this research were the pelvis and the shoulder. Countermeasures in this study were especially focused on decreasing the load on these anatomical structures. The evaluated countermeasures were: - Sill and B-pillar geometric adaptation to better perform against the AE-MDB - Reduced stiffness of the door panel at the occupant impact location - Optimized door beam Finite Element Method (FEM) tools were used as the basis of this research, including validated and correlated models with experimental full car tests. Initially, the research started with FEM testing of the current vehicle according to both past and current Euro NCAP protocols. Pelvic biomechanical values reached the lower performance limits when testing the AE-MDB barrier at 50 km/h. This new test has an especial impact in midsized cars in terms of pelvis loading, leading the pubic and sacroiliac forces to increase in 38.6% and 25.8% respectively, in the vehicle studied. After the application of the structural countermeasures, the sacroiliac force decreased by 24.9% and the pubic force decreased by 32.5%. Changes in the Euro NCAP protocol and regulations are always a challenge for design departments. In this research the differences between Euro NCAP side protocols were analyzed and some potential countermeasures were highlighted.
Citationcrespo, S., perez rapela, D., roman-marin, J., Martin-Vázquez, ., Luzon, B., Arregui-Dalmases, C. Structural optimisation in vehicle development for the current Euro NCAP side crash protocol: how to minimise the structural changes due to the current barrier stiffness and geometry . A: International Research Council on the Biomechanics of Injury Conference. "2016 IRCOBI Conference Proceedings 14 – 16 September 2016 – Malaga (Spain) International Research Council on the Biomechanics of Injury". Málaga: 2016, p. 1-14.
URIhttp://hdl.handle.net/2117/98759
Publisher versionhttp://www.ircobi.org/wordpress/downloads/irc16/default.htm
Collections
Share: