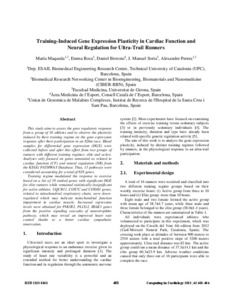 Document typeConference lecture
Rights accessOpen Access
Abstract
This study aims to assess the gene regulatory response from a group of 16 athletes and to observe the plasticity induced by their training regime on the gene expression response after their participation in an 82km race. Blood samples for differential gene expression (DGE) were collected before and after this effort from two groups of runners with different training regimes: elite and active. Analyses only focused on genes annotated as related to cardiac function (CF) and neural regulation (NR) from the KEGG PATHWAY Database. Thus, 13 pathways were considered accounting for a total of 629 genes. Training regime modulated the response to exercise based on a list of 18 ranked genes with significant DGE for elite runners while remained statistically insignificant for active athletes. UQCR11, COX7C and COX4I1 genes, related to mitochondrial respiratory chain, were down-regulated which may indicate mitochondrial function impairment in cardiac muscle. Increased expression levels were obtained for PIK3R2, PLCG2, IRAK3 genes from the positive signaling cascades of neurotrophins pathway, which may reveal an improved heart rate control thanks to a better cardiac sympathetic innervation.
CitationMaqueda, M., Roca, E., Brotons, D., Soria, J., Perera, A. Training-induced gene expression plasticity in cardiac function and neural regulation for ultra-trail runners. A: Computing in Cardiology Annual Conference. "Computing in Cardiology 2015; 42". Nice: 2015, p. 401-404.
URIhttp://hdl.handle.net/2117/98755
ISBN2325-8861 (ISSN)
Publisher versionISSN 2325-8861
Collections
Share: