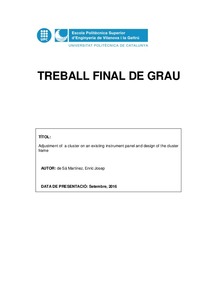 Except where otherwise noted, content on this work is licensed under a Creative Commons license : Attribution-NonCommercial-ShareAlike 3.0 Spain
Abstract
This project involves the adaptation of the Seat Leon’s dashboard into the Sirius’ S80 instrument panel, FAW’s car model. This project could be real in which a feasibility study has been done to ensure that the new kombi’s adaption presents the lowest economic impact. Conducted the feasibility and decided how the new bindings will be, it has been proceed with pattern of new parts like front kombi cover and new design of cluster frame. Shaping has to be very careful since it is a plastic injection part, with which, if design is not correct, it can suffer effects such as sink marks, cracks, shrinkage, etc. Once the 3D pattern is ended and it is ensured that all brackets will work correctly and won’t have a negative effect to the surroundings, thickness analysis of parts has been done by a Catia module. This tool lets us know if thickness is constant, so the mold cavity is properly filled and also lets us know if there are big concentrations of material, which may lead to sink marks; in this case, 3D geometry has to be redesigned in order to avoid it. Given as valid the design in terms of manufacturing, it is examined whether the piece can withstand applied stress. In this case, there is no point analysing clip’s resistance during assembly since RPS function consists on restricting movement once piece is in its correct position. Therefore, in the nodal deformation it has been studied the collapse of the cluster frame by applying a given load. If the sink exceeds the limit value, geometry has to be redesigned. At same time, Von Misses stresses in all brackets and tabs have been studied when the load is applied to determine the work piece’s collapse. Once the design is valid, an assembly sequence is displayed to show which parts are already assembled before the designed are in their position, and which ones will be fixed after the ones that have been modelled from zero. Cluster frame and kombi front cover 2D layout have been made in order to molders could tool the cavity in the mold. Finally, the engineering budget cost is determined taking into account the amount of hours spent modelling, license fees, hardware depreciation and other expenses. The approximate price of the mold and manufacturing cost of a piece is determined based on typical automotive volume order.
SubjectsIndustrial design, Speedometers, Automobiles -- Design and construction, Disseny industrial, Automòbils -- Disseny i construcció
DegreeGRAU EN ENGINYERIA DE DISSENY INDUSTRIAL I DESENVOLUPAMENT DEL PRODUCTE (Pla 2009)
URIhttp://hdl.handle.net/2117/98685
Collections
Share: