Run-out of landslides in brittle soils 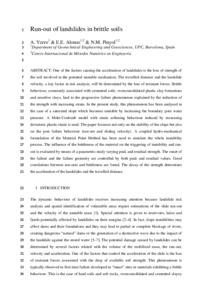 Except where otherwise noted, content on this work is licensed under a Creative Commons license : Attribution-NonCommercial-NoDerivs 3.0 Spain
Abstract
One of the factors causing the acceleration of landslides is the loss of strength of the soil involved in the potential unstable mechanism. The travelled distance and the landslide velocity, a key factor in risk analysis, will be determined by the loss of resistant forces. Brittle behaviour, commonly associated with cemented soils, overconsolidated plastic clay formations and sensitive clays, lead to the progressive failure phenomenon explained by the reduction of the strength with increasing strain. In the present study, this phenomenon has been analysed in the case of a saturated slope which becomes unstable by increasing the boundary pore water pressure. A Mohr-Coulomb model with strain softening behaviour induced by increasing deviatoric plastic strain is used. The paper focusses not only on the stability of the slope but also on the post failure behaviour (run-out and sliding velocity). A coupled hydro-mechanical formulation of the material point method has been used to simulate the whole instability process. The influence of the brittleness of the material on the triggering of instability and run-out is evaluated by means of a parametric study varying peak and residual strength. The onset of the failure and the failure geometry are controlled by both peak and residual values. Good correlations between run-outs and brittleness are found. The decay of the strength determines the acceleration of the landslides and the travelled distance.
CitationYerro, A., Alonso, E., Pinyol, N.M. Run-out of landslides in brittle soils. "Computers and geotechnics", Març 2016, vol. 80, p. 427-439.
URIhttp://hdl.handle.net/2117/98637
DOI10.1016/j.compgeo.2016.03.001
ISSN0266-352X
Publisher versionhttp://www.sciencedirect.com/science/article/pii/S0266352X16300374
Collections
Share: