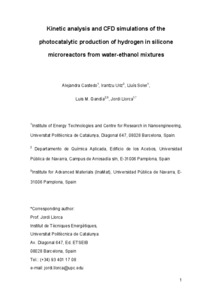 Document typeArticle
Rights accessOpen Access
Abstract
Silicone microreactors containing microchannels of 500 µm width in a single or triple stack configuration have been manufactured, coated with an Au/TiO2 photocatalyst and tested for the photocatalytic production of hydrogen from water-ethanol gaseous mixtures under UV irradiation. Computational fluid dynamics (CFD) simulations have revealed that the design of the distributing headers allowed for a homogeneous distribution of the gaseous stream within the channels of the microreactors. A rate equation for the photocatalytic reaction has been developed from the experimental results obtained with the single stack operated under different ethanol partial pressures, light irradiation intensities and contact times. The hydrogen photoproduction rate has been expressed in terms of a Langmuir-Hinshelwood-type equation that accurately describes the process considering that hydrogen is produced through the dehydrogenation of ethanol to acetaldehyde. This equation incorporates an apparent rate constant (kapp) that has been found to be proportional to the intrinsic kinetic rate constant (k), and that depends on the light intensity (I) as follows: kapp = k·I0.65. A three-dimensional isothermal CFD model has been developed in which the previously obtained kinetic equation has been implemented. The model adequately describes the production of hydrogen of both the single and triple stacks. Moreover, the specific hydrogen productions (i.e. per gram of catalyst) are very close for both stacks thus suggesting that the scaling-up of the process could be accomplished by simply numbering-up. However, small deviations between the experimental and predicted hydrogen production suggest that a fraction of the radiation is absorbed by the microreactor components which should be taken into account for scaling-up purposes.
CitationCastedo, A., Uriz, I., Soler, L., Gandía, L., Llorca, J. Kinetic analysis and CFD simulations of the photocatalytic production of hydrogen in silicone microreactors from water-ethanol mixtures. "Applied catalysis B. Environmental", 1 Abril 2017, vol. 203, p. 210-217.
URIhttp://hdl.handle.net/2117/98607
DOI10.1016/j.apcatb.2016.10.022
ISSN0926-3373
Publisher versionhttp://www.sciencedirect.com.recursos.biblioteca.upc.edu/science/article/pii/S0926337316307858
Collections
Share: