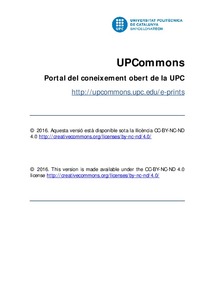 Document typeArticle
Rights accessOpen Access
Abstract
A three-dimensional dynamic model for calculating the ground-borne vibrations generated by harmonic loads applied on the interior floor of a double-deck circular tunnel is developed. The response of the system is obtained coupling the interior floor subsystem and the tunnel-soil subsystem in the wavenumber-frequency domain. The interior floor is modeled as a thin plate of infinite length in the train circulation direction and the tunnel-soil system is described using the Pipe in Pipe model. Some numerical instabilities of the resulting expressions are overcome by using analytic approximations. The results show that the dynamic behavior of the interior floor clearly influences the magnitude of the coupling loads acting on the tunnel structure. The soil response to a harmonic load acting on the double-deck tunnel is compared to the one obtained for the case of a simple tunnel finding significant differences between them for the whole range of frequencies studied. The proposed model extends the prediction of train-induced vibrations using computationally efficient models to this type of tunnel structure.
Description
© 2016. This version is made available under the CC-BY-NC-ND 4.0 license http://creativecommons.org/licenses/by-nc-nd/4.0/
CitationClot, A., Arcos, R., Romeu, J., Pàmies, T. Dynamic response of a double-deck circular tunnel embedded in a full-space. "Tunnelling and underground space technology", 1 Octubre 2016, vol. 59, p. 146-156.
URIhttp://hdl.handle.net/2117/98584
DOI10.1016/j.tust.2016.07.004
ISSN0886-7798
Publisher versionhttp://www.sciencedirect.com/science/article/pii/S0886779816304126
Collections
Share: