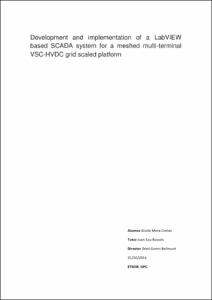 Document typeBachelor thesis
Rights accessOpen Access
Abstract
This project is oriented to the development of a Supervisory, Control and Data Acquisition (SCADA) software to control and supervise electrical variables from a scaled platform that represents a meshed HVDC grid employing National Instruments hardware and LabVIEW logic environment. The objective is to obtain real time visualization of DC and AC electrical variables and a lossless data stream acquisition. The acquisition system hardware elements have been configured, tested and installed on the grid platform. The system is composed of three chassis, each inside of a VSC terminal cabinet, with integrated Field-Programmable Gate Arrays (FPGAs), one of them connected via PCI bus to a local processor and the rest too via Ethernet through a switch. Analogical acquisition modules were A/D conversion takes place are inserted into the chassis. A personal computer is used as host, screen terminal and storing space. There are two main access modes to the FPGAs through the real time system. It has been implemented a Scan mode VI to monitor all the grid DC signals and a faster FPGA access mode VI to monitor one converter AC and DC values. The FPGA application consists of two tasks running at different rates and a FIFO has been implemented to communicate between them without data loss. Multiple structures have been tested on the grid platform and evaluated, ensuring the compliance of previously established specifications, such as sampling and scanning rate, screen refreshment or possible data loss. Additionally a turbine emulator was implemented and tested in Labview for further testing.
SubjectsSCADA (Computer program), Electronic measurements, SCADA (Programes d'ordinador), Electrònica -- Mesuraments
URIhttp://hdl.handle.net/2117/98562
Collections
Share: