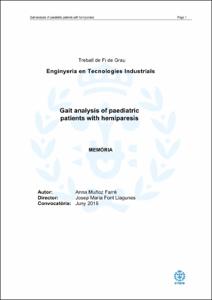 CovenanteeHospital Sant Joan de Déu
Document typeBachelor thesis
Rights accessOpen Access
Abstract
The main objective of this Final Project for the Bachelor Degree in Industrial Technology Engineering is to study how the feedback device Walking o’Clock modifies gait pattern of paediatric patients with hemiparesis. The project has been developed in collaboration with personnel of Sant Joan de Déu Hospital (HSJD), that selected the three patients involved in the study. The gait of these patients was captured in the UPC Biomechanics Laboratory, and the kinematic analysis was performed using OpenSim, a free software tool developed by Stanford University that is widely used by the scientific community. Walking o’Clock, by Draco Systems, is an electronic device with an inertial measurement unit (IMU). It was used to measure thigh orientation in the study, aided by the engineer who created this product. By measuring this orientation, the physiotherapist would choose what kind of feedback the patient should be put under to. The patients’ movement was analysed under three different situations: natural gait, gait using the device (with the feedback chosen) and gait after using the device (after feedback). Four angular coordinates in the sagittal plane (hip flexion, pelvic tilt, knee flexion and ankle dorsiflexion) were analysed and compared. From the results, it was shown that the device modifies the gait pattern. However, depending on the patient and the feedback, the walking kinematics was modified in different ways. In some aspects, an improvement was found for the selected paediatric patients. This report describes all the processes involved in the analysis, as well as the methodology used. To obtain the motion data, the human body has been modelled as a multibody system with rigid bodies and ideal joints with different degrees of freedom. The process to export the kinematics data using OpenSim is explained in detail. From the position of each body, inverse kinematics determines the configuration (position and orientation) of the multibody system along time.
SubjectsBiomechanics, Biomecànica
DegreeGRAU EN ENGINYERIA EN TECNOLOGIES INDUSTRIALS (Pla 2010)
URIhttp://hdl.handle.net/2117/98528
Collections
Share: