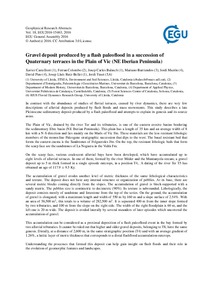 Ruiz Bellet, Josep Lluís
Tuset Mestre, Jordi
Document typeConference lecture
Rights accessOpen Access
Abstract
In contrast with the abundance of studies of fluvial terraces, caused by river dynamics, there are very few descriptions of alluvial deposits produced by flash floods and mass movements. This study describes a late Pleistocene sedimentary deposit produced by a flash paleoflood and attempts to explain its genesis and its source areas. The Plain of Vic, drained by the river Ter and its tributaries, is one of the eastern erosive basins bordering the sedimentary Ebre basin (NE Iberian Peninsula). This plain has a length of 35 km and an average width of 8 km with a N-S direction and lies mainly on the Marls of Vic Fm. These materials are the less resistant lithologic members of the monocline Paleogene stratigraphic succession that dips to the west. The basal resistant bed that forms the eastern cuesta is the Sandstones of Folgueroles Fm. On the top, the resistant lithologic beds that form the scarp face are the sandstones of La Noguera in the Vidrà Fm. On the scarp face, various coalescent alluvial bays have been developed, which have accumulated up to eight levels of alluvial terraces. In one of them, formed by the river Mèder and the Muntanyola stream, a gravel deposit up to 5 m thick formed in a single episode outcrops, in a position T4,. A dating of the river Ter T5 has obtained an age of 117.9 9.5 Ky. The accumulation of gravel erodes another level of metric thickness of the same lithological characteristics and texture. The deposit does not have any internal structure or organization of pebbles. At its base, there are several metric blocks coming directly from the slopes. The accumulation of gravel is block-supported with a sandy matrix. The pebbles size is centimetric to decimetric (90%). Its texture is subrounded. Lithologically, the deposit consists mostly of sandstone and limestone from the top of the series. On the ground, the accumulation of gravel is elongated, with a maximum length and width of 550 m by 160 m and a slope surface of 2.54%. With an area of 56,500 m2, this totals to a volume of 282,500 m3. It is separated 400 m from the inner slope formed by two tributaries, and 100 m from the slope on the right side. The width of the right floodplain is 60 m, and the left one is 20 m wide. The deposit is eroded laterally by several meanders of later episodes which uncovered the accumulation of gravel. This accumulation can be considered as a proximal deposition of a flash paleoflood event in the bay formed by two alluvial tributaries. It cannot be ruled out that higher and older gravel deposits, belonging to T8, have the same genesis. Distally, at a distance of 2,600 m, in the same stratigraphic position (T4) and with an average gradient of 1.26%, a lutitic layer of metric thickness that corresponds to a distal flashflood accumulation outcrops. Understanding the processes that formed this deposit can help gain insight on flash floods and their role in the evolution of geomorphic features and landscapes.
Location
1: Rbla. de St. Domènec - St. Pere, 08500 Vic, Barcelona, Espanya
CitationCastelltort, X., Colombo, F., Balasch, J., Barriendos, M., Mazon, J., Pino, D., Ruiz, J., Tuset, J. Gravel deposit produced by a flash paleoflood in a succession of Quaternary terraces in the Plain of Vic (NE Iberian Peninsula). A: European Geosciences Union General Assembly. "Geophysical Research Abstracts". Viena: 2016, p. 1.
URIhttp://hdl.handle.net/2117/98487
Collections
Share: