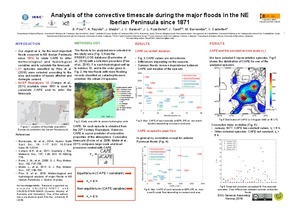 Analysis of the convective timescale during the major floods in the NE .pdf (1,557Mb)
Share:

Balasch Solanes, Josep Carles
Ruiz Bellet, Josep Lluís
Tuset Mestre, Jordi
Barriendos Valve, Mariano
Castelltort, Xavier
Document typeConference lecture
Rights accessOpen Access
Abstract
Floods are the most severe natural hazard in the western Mediterranean basin. They cause most of the damages and most of the victims. Some of the selected floods caused more than one hundred casualties each and a large quantity of damages in infrastructures. In a previous work (Balasch, et al., 2015), using the PREDIFLOOD database (Barriendos et al., 2014) we studied the atmospheric conditions that occurred during some of the most important floods occurred in the north-east of the Iberian Peninsula in the last centuries: 1874, 1875, 1894, 1897, 1898, 1901, 1907, 1913, 1919, 1932, 1937, 1940, 1962, 1963, 1977, 1994, 1996, and 2000. We analyzed the atmospheric synoptic situations at the time of each flood from the data provided by NOAA 20th Century Reanalysis and we compared it to the rainfall spatial distributions obtained with the hydrological modeling. In this work we enlarge the previous investigation by analyzing the evolution of a convective index proposed by Done et al. (2006) and modified by Molini et al. (2011). This index, called convective time scale, is obtained from the evolution of CAPE and is used to separate equilibrium and non-equilibrium convection. In the former, CAPE generated by large-scale processes is balanced by the consumption due to convection. In the second case, CAPE is created by large-scale processes over a long time and is rapidly consumed during outbreaks of convection. Both situations produced a totally different evolution of CAPE with low and approximately constant values in the first case and large and variable values in the second. Additionally, from this index it can be estimated the rainfall rate. We use data provided by NOAA 20th Century Reanalysis, to calculate the convective time scale and to analyze its evolution and horizontal distribution. We study the correspondence between the convective timescale, the season when the flood occurred, duration of the rainfall, and the specific peak flow rate of the flood. Finally, for the most recent episodes rainfall rate estimation from the convective timescale is compared with the observations. Balasch, J. C., Ruiz-Bellet, J. L., Tuset, J., Barriendos, M., Mazón, J., Pino, D. and Castelltort, X.: Transdisciplinary and multiscale reconstruction of the major flash floods in NE Iberian Peninsula. EGU General Assembly, 2015. Barriendos, M., Ruiz–Bellet, J. L., Tuset, J., Mazon, J., Balasch, J. C., Pino, D., Ayala, J. L.: The
CitationPino, D., Reynés, A., Mazon, J., Balasch, J., Ruiz, J., Tuset, J., Barriendos, M., Castelltort, X. Analysis of the convective timescale during the major floods in the NE Iberian Peninsula since 1871. A: European Geosciences Union General Assembly. "Geophysical Research Abstracts". Viena: 2016, p. 1.
URIhttp://hdl.handle.net/2117/98485
Collections
Share: