Implementation of a robot platform to study bipedal walking 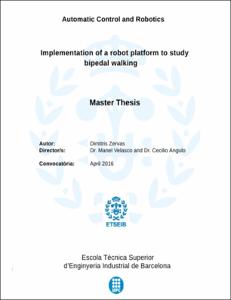 Except where otherwise noted, content on this work is licensed under a Creative Commons license : Attribution-NonCommercial-NoDerivs 3.0 Spain
Abstract
On this project, a modi cation of an open source, 3D printed robot, was implemented, with the purpose to create a more a ordable bipedal platform proper for studying Bipedal Walking algorithms. The original robot is a part of an open-source platform, called Poppy, that is formed from an interdisciplinary community of beginners and experts. One of the robots of this platform, is the Poppy Humanoid. The rigid parts of the Poppy Humanoid (as well as the rest of the Poppy platform robots) are 3D printed, a key factor of lowering the cost of a robot. The actuators used though, are expensive commercial DC-motors that increase the total cost of the robot drastically. This high cost of the actuators of Poppy, led this project to modify cheaper actuators while maintaining the same performance of their predecessors. Taking apart the components of the cheaper actuator, only the motor, the gears and the case that host them were kept, and a new design was made to control the motor and to meet the requirements set from the commercial motors. This new design of the actuator include a 12-bit resolution magnetic encoder to read the position of the shaft of the motor, a driver to run the motor, and also an embedded Arduino micro-controller. This feature of an Arduino as part of the actuator, gives the advantage over the commercial motor, as the user has the freedom to upload his own codes and to implement his own motor controllers. The result is a fully programmable actuator hosted on the same motor case. The size of this actuator though, is di erent from the commercial one. In order to mount the new actuators to the platform, Joan Guasch designed proper 3D printed parts. Apart of these parts, Joan also modi ed the leg design, in order to add another joint on the ankle (roll) as this Degree of Freedom (DoF) is important for Bipedal Walking algorithms and was missing from the original Poppy Humanoid leg design. The modi ed robot, is called Poppy-UPC and is a 12 DoF biped platform. For the communication between the motors and the main computer unit, a serial communication protocol was implemented based to the RS-485 standard. Multiple receivers (motors and sensors) can be connected to such a network in a linear, multi-drop con guration. The main computer unit of Poppy-UPC is an Odroid-C1 board. Essentially, this board is a Quad-core Linux computer fully compatible to run ROS. Odroid is acting as the master of the network and is gathering all the informations of the connected nodes, in order to publish them in ROS-topics. That way, the Poppy-UPC is connected to the ROS environment and ROS packages can be used for any further implementation with this platform. Finally, following the open-source spirit of the Poppy platform, all the codes and information are available at https://github.com/dimitris-zervas.
SubjectsRobots -- Design and construction, Robots -- Disseny i construcció
URIhttp://hdl.handle.net/2117/98474
Collections
Share: