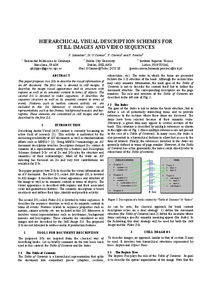 This paper proposes two description schemes (DSs) to describe the visual information of an audio-visual (AV) document. The first one, is devoted to still images. It describes the image visual appearance and its structure with regions as well as its semantic content in terms of objects. The second DS is devoted to video sequences. It describes the sequence structure as well as its semantic content in terms of events. Features such as motion, camera activity, etc. are included in this DS. Moreover, it involves static visual representations such as key-frames, background mosaics and key-regions. These elements are considered as still images and are described by the first DS.
CitationSalembier, P., O'Connor, N., Correia, P., Pereira, F. Hierarchical visual description schemes for still images and video sequences. A: IEEE International Conference on Image Processing. "1999 International Conference on Image Processing: ICIP99: 24-28 October, 1999: Kobe, Japan". Kobe: Institute of Electrical and Electronics Engineers (IEEE), 1999, p. 121-125.
URIhttp://hdl.handle.net/2117/98443
DOI10.1109/ICIP.1999.822867
ISBN0-7803-5470-2
Publisher versionhttp://ieeexplore.ieee.org.recursos.biblioteca.upc.edu/document/822867/