Uplink beamforming for the FDD mode of UTRA 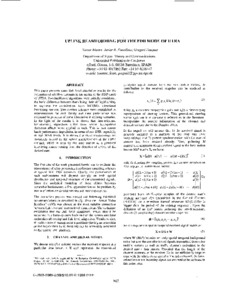 Document typeConference report
PublisherInstitute of Electrical and Electronics Engineers (IEEE)
Rights accessOpen Access
Abstract
This paper presents some link level simulation results for the evaluation of adaptive antennas in the uplink of the FDD mode of UTRA (UMTS terrestrial radio access). Two families of algorithms were initially considered, the basic difference between them being their ability/disability to suppress the contribution from W-CDMA directional interfering sources. Two distinct schemes were established as representatives for each family and their performance was evaluated in presence of some illustrative interfering scenarios. In the light of the results it is shown that time-reference beamforming algorithms suffer from severe beam pattern distortion effects when applied as such. This in turn causes harsh performance degradation in terms of raw BER, especially at high SINR levels. It is shown that these shortcomings are essentially caused by the uplink multiplexing of the traffic channel, which is seen by the base station as a powerful interfering source coming from the direction of arrival of the desired user.
CitationMestre, F., R. Fonollosa, Javier, Vazquez, G. Uplink beamforming for the FDD mode of UTRA. A: IEEE Vehicular Technology Conference. "1999 IEEE 49th Vehicular Technology Conference: Houston, Texas, USA: May, 16-20". Houston, Texas: Institute of Electrical and Electronics Engineers (IEEE), 1999, p. 867-871.
URIhttp://hdl.handle.net/2117/98437
DOI10.1109/VETEC.1999.778332
ISBN0-7803-5565-2
Publisher versionhttp://ieeexplore.ieee.org.recursos.biblioteca.upc.edu/document/778332/
Collections
Share: