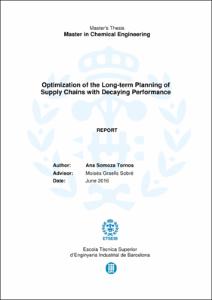 Document typeMaster thesis
Rights accessOpen Access
Abstract
This master's thesis addresses the optimization of supply and distribution chains considering the effect that equipment aging may cause over the performance of facilities involved in the process. The decaying performance of the facilities is modeled as an exponential equation and can be either physical or economic, thus giving rise to a novel mixed integer non-linear programming (MINLP) formulation. The optimization model has been developed based on a typical chemical supply chain. Thus, the best long-term investment plan has to be determined given production nodes, their production capacity and expected evolution; aggregated consumption nodes (urban or industrial districts) and their lumped demand (and expected evolution); actual and potential distribution nodes; distances between the nodes of the network; and a time horizon. The model includes the balances in each node, a general decaying performance function, and a cost function, as well as constraints to be satisfied. Hence, the investment plan (decision variables) consists not only on the start-up and shutdown of alternative distribution facilities, but also on the sizing of the lines satisfying the flows. The model has been implemented using GAMS optimization software. Results considering a variety of scenarios have been discussed. In addition, different approaches to the starting point for the model have been compared, showing the importance of initializing the optimization algorithm. The capabilities of the proposed approach have been tested through its application to two case studies: a natural gas network with physical decaying performance and an electricity distribution network with economic decaying performance. Each case study is solved with a different procedure to obtain results. Results demonstrate that overlooking the effect of equipment aging can lead to infeasible (for physical decaying performance) or unrealistic (for economic decaying performance) solutions in practice and show how the proposed model allows overcoming such limitations thus becoming a practical tool to support the decision-making process in the distribution sector
SubjectsBusiness logistics -- Management, Mathematical optimization, Logística (Indústria) -- Direcció i administració, Optimització matemàtica
DegreeMÀSTER UNIVERSITARI EN ENGINYERIA QUÍMICA (Pla 2012)
URIhttp://hdl.handle.net/2117/98402
Collections
Share: