The 2-3 November 2015 flood of the Sió River (NE Iberian Peninsula): a flash flood that turns into a mudflow downstream 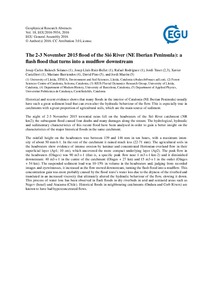 Historical and recent evidence shows that many floods in the interior of Catalonia (NE Iberian Peninsula) usually have such a great sediment load that can even alter the hydraulic behaviour of the flow. This is especially true in catchments with a great proportion of agricultural soils, which are the main source of sediment. The night of 2-3 November 2015 torrential rains fell on the headwaters of the Sió River catchment (508 km2); the subsequent flood caused four deaths and many damages along the stream. The hydrological, hydraulic and sedimentary characteristics of this recent flood have been analysed in order to gain a better insight on the characteristics of the major historical floods in the same catchment. The rainfall height on the headwaters was between 139 and 146 mm in ten hours, with a maximum intensity of about 50 mm h-1. In the rest of the catchment it rained much less (22-71 mm). The agricultural soils in the headwaters show evidence of intense erosion by laminar and concentrated Hortonian overland flow in their superficial layer (Ap1; 10 cm), which uncovered the more compact underlying layer (Ap2). The peak flow in the headwaters (Oluges) was 90 m3 s-1 (that is, a specific peak flow near 1 m3 s-1 km-2) and it diminished downstream: 40 m3 s-1 in the centre of the catchment (Oluges + 27 km) and 15 m3 s-1 in the outlet (Oluges + 54 km). The suspended sediment load was 10-15% in volume in the headwaters and, judging from recorded images and eyewitnesses, it increased as the flow moved downstream, turning the flash flood into a mudflow. This concentration gain was most probably caused by the flood wave’s water loss due to the dryness of the riverbed and translated in an increased viscosity that ultimately altered the hydraulic behaviour of the flow, slowing it down. This process of water loss has been observed in flash floods in dry riverbeds in arid and semiarid areas such as Negev (Israel) and Atacama (Chile). Historical floods in neighbouring catchments (Ondara and Corb Rivers) are known to have had hyperconcetrated flows.