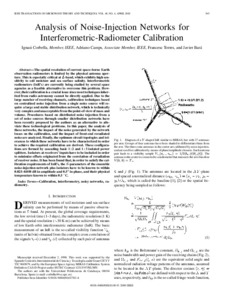 Document typeArticle
PublisherIEEE Microwave Theory and Techniques Society
Rights accessOpen Access
Abstract
Abstract: The spatial resolution of current space-borne Earth observation radiometers is limited by the physical antenna aperture. This is especially critical at L-band, which exhibits high sensitivity to soil moisture and sea surface salinity. Interferometric radiometers (InR's) are currently being studied by several space agencies as a feasible alternative to overcome this problem. However, their calibration is a crucial issue since most techniques inherited from radio astronomy cannot be directly applied. Due to the large number of receiving channels, calibration techniques based on centralized noise injection from a single noise source will require a large and stable distribution network, which is technically very complex and unacceptable from the point-of-view of mass and volume. Procedures based on distributed noise injection from a set of noise sources through smaller distribution networks have been recently proposed by the authors as an alternative to alleviate these technological problems. In this paper, the analysis of these networks, the impact of the noise generated by the network losses on the calibration, and the impact of front-end reradiated noise are analyzed. Finally, the optimum circuit topologies and tolerances to which these networks have to be characterized in order to achieve the required calibration are derived. These configurations are formed by cascading basic 1:2 and 1:3 isolated power splitters. Isolators at receiver inputs have to be included in order to minimize offsets originating from the correlation of reradiation of receiver noise. It has been found that, in order to satisfy the calibration requirements of InR's, the S-parameters of the ensemble noise-injection network plus isolators have to be known to within 0.025-0.050 dB in amplitude and 0.5/spl deg/ in phase, and their physical temperature known to within 0.5/spl deg/C.
CitationCorbella, I., Camps, A., Torres, F., Bara, F. Analisys of noise injection networks for interferometric radiometer calibration. "IEEE transactions on microwave theory and techniques", Abril 2000, vol. 48, núm. 4, p. 545-552.
URIhttp://hdl.handle.net/2117/98362
DOI10.1109/22.842026
ISSN0018-9480
Publisher versionhttp://ieeexplore.ieee.org.recursos.biblioteca.upc.edu/document/842026/
Collections
Share: